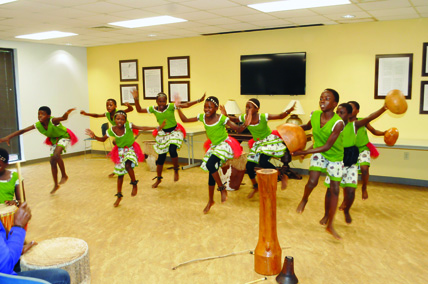 The large group that turned out to watch the Ugandan Kids Choir at the Greenville Butler County Public Library on Thursday was not disappointed.

A group of 10 children ranging in ages from eight to 12 performed at the GBCPL Wednesday at noon, and received quite an ovation from the crowd.

The children in the choir are all natives of Uganda, and have been on tour in the United States since February. The Ugandan Kids Choir is a ministry of Childcare Worldwide, and is led by Emma Roorda. She was on hand Thursday to answer questions about the group.

“I spent some time living in Uganda, and heard about Childcare’s mission for helping children. I wanted to get involved, so I applied for the Tour Leader choir position,” she said. “It has really helped that I knew the Ugandan culture so well before beginning tour. I even understand some of the language. When I was living there I made a great effort to really learn from the Ugandan people – learn their culture and learn from them, which has really benefited me in this position with Childcare.”

Roorda said the songs and dances performed by the Kids Choir were all authentic to Ugandan culture.

“All the songs that they performed at the Greenville Library are traditional African pieces,” she said. “Our Ugandan Music director, Innocent, choreographs them and helps to bring the performances to life. All of our instruments and costumes are hand made, and the kids sing songs in a variety of local African languages (Mostly from Uganda) It is the real deal.”

The Kids Choir tour continued on to Monroeville on Friday, and their next stop will be in Jackson on Wednesday. The entire group travels by bus throughout the United States. The tour began in the New England area and will end in Washington State in late April.

“The kids rehearse at least four times per week – about two or three hours at a time,” Roora said. “When we are not practicing or performing, the kids are doing school with our Ugandan teacher, Zainah, or they’re playing, resting or traveling. We try to keep a healthy balance of rehearsal, school, rest and fun. We are a busy family.”

For more information about the Ugandan Kids Choir, or the Childcare Worldwide organization, visit www.childcareworldwide.org.