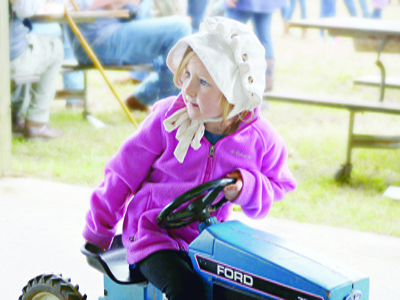 It was a chilly, overcast morning that dawned over the rolling pastures a few miles outside Greenville last Saturday. And while the skies stayed gray much of the day, there were plenty of sunny smiles sighted and peals of laughter ringing across the Old Time Farm Day site.

The 14th annual event drew hundreds to the site to enjoy seeing and even getting their hands involved in old-fashioned farming ways, from shucking and shelling ears of corn to bottle feeding a calf.

Neil Faulkenberry, a perennial favorite at the event, was busy with hammer and anvil at his blacksmith’s forge, making nails, hooks and garden spikes for sale to attendees and answering the questions of interested onlookers.

Mary Croley, a noted local artist and craftsperson, once again brought a large display of her paintings, note cards and crafts, including artwork by her daughter, Sarah Still.

“I always enjoy coming out here each year – it’s a beautiful site,” Croley said with a smile.

New to the event as vendors rather than attendees were Robin Courtney of Style Dots, her husband, Randy, owner of Blackwater Creations, and their youngest son, Jacob.

“This is a great event and it’s so important for the younger generations to be able to see how things were done in the old days,” Randy Courtney said. “We’ve had a lot of people stop by our booth and we enjoy seeing old friends – and making new ones.”

Layla Thompson was one of those stopping by the Blackwater Creations booth. The little girl was highly intrigued by the furs, skins and other natural wonders found at the booth, posing plenty of questions for the taxidermist/trapper/artisan.

Later, Layla was thrilled to get a chance to actually hug Genesis the calf, one of the many animals present for Farm Day.

Nearby at the petting zoo, youngsters gathered around to cuddle bunnies, pet exotic fowl and visit with llamas, goats, miniature donkeys and other furry friends, causing a flurry of cell phone photos taken by their parents and grandparents.

Portable phones and hand-held video games were conspicuously absent in the hands of the children present at the event. They were too busy climbing the hay stack to the giant tunnel slide, romping in the corn crib, pedaling miniature tractors, riding the barrel trains or watching the old-fashioned saw mill in operation.

It is a sight that was very refreshing to Old Time Farm Day volunteer Sue Arnold. The self-confessed “city girl” says she is glad to be able to lend a hand in helping keep the tradition alive, one that was so important to her late husband, Kyle.

Arnold hopes future generations will be able to enjoy days just as fun and full of “old-timey” ways, offering those in attendance a genuine taste of farm life.

“I think each year that Farm Day is more endearing to our community,” she said. “I feel closer to God when I am on that hill and it reminds me to appreciate what a wonderful area this is.”

Arnold gives credit to those that have worked hard to make Farm Day a positive experience over the years.

“We wouldn’t even have Old Time Farm Day if it weren’t for Cary Thompson and some of his contemporaries,” she said. “But the group is growing older and the crowd is thinning out. Help is needed to keep this all going.”

“We would love to see some of these younger folks get involved,” she concluded. “We could use their energy and their ideas. It takes a lot of work every year to create a successful event. The more on board, the easier it is for Farm Day to put on such a fantastic day for Butler County.”

Feds investigating hazardous spill in city; public not in danger

Federal agencies are currently in Greenville investigating a “hazardous material situation” that has contaminated a small creek within the city... read more