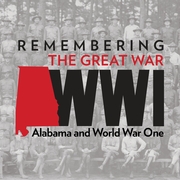 World War I, also know as the “Great War,” is subject studied from one side of the globe to the other, but a very important moment in the war is connected to Butler County.

The 167th infantry regiment hailed from Alabama with several men from Butler County, and fought in one of the most important battles of WWI at Croix Rouge Farm in July of 1918.

A celebration of the war’s centennial anniversary is set to come to Greenville. The traveling exhibit, “Remembering the Great War: Alabama and World War I,” will come to the Greenville Butler County Public Library on Oct. 27 and remain open until Nov. 16.

Dr. Mark Wilson is the director of the Caroline Marshall Draughon Center of the Arts and Humanities at Auburn University. He is also a member of the Alabama WWI Centennial Committee. Dr. Wilson along with 17 industrial design students from Auburn worked a full year to build the traveling exhibit.

“We come up with a narrative for the exhibit through research done at the Alabama State Archives along with our own research,” Dr. Wilson said. “It took us about a year to complete and was relatively inexpensive. We’re excited to bring this to Greenville. It’s meaningful due to all of the Butler County connections to WWI.”

Library Director Kevin Pearcey said he hopes all citizens of Butler County take the opportunity to visit the library and see the exhibit.
“As time moves on and newer generations are removed from historical events such as World War I, it’s incredibly important for us to remember and recognize the sacrifices made by those who lived through such times,” he said.
Pearcey said the Butler County Historical & Genealogical Society, which is housed inside the library, helped secure the exhibit for the library.
“The BCHGS has been extremely active this year with recognizing Butler County’s own soldiers who served and died in World War I, so we were pleased and very appreciative to have this opportunity to host the exhibit when it was brought to us,” he said.

Dr. Ruth Truss is a professor of history at Montevallo University. She will be at the GBCPL to discuss the war and the exhibit on Sunday, Oct. 28 at 2 p.m. Truss said she did a great of research on WWI during her time as an undergrad at the University of Alabama.

“WWI has always fascinated me, and specifically those from Alabama who served,” she said. “When I come to Greenville, I will speak about the 167th infantry, and the war as a whole. Information I’ll be giving on the 167th will deal with how the unit was organized, how they trained and what life was like for them in France.”

Visitors to “Remembering the Great War: Alabama and World War I” enter the exhibit through a replica of the victory arch that was constructed in Montgomery to celebrate the soldiers’ return home. They encounter a series of vertical panels that are placed around a circular timeline of World War I. A display case of actual World War I artifacts sets in the center. The panels, which are lightweight and easy to assemble, give a history of Alabama’s participation in World War I from various perspectives. One three-sided panel profiles actual Alabamians: Cleveland Abbot, a Black soldier, Edward Wren, a white soldier, and Anna Mae Beddow, a nurse. As an interactive element, visitors make poppies for the memorial panel. The design concept linking the exhibit together is World War I’s trench warfare experience.