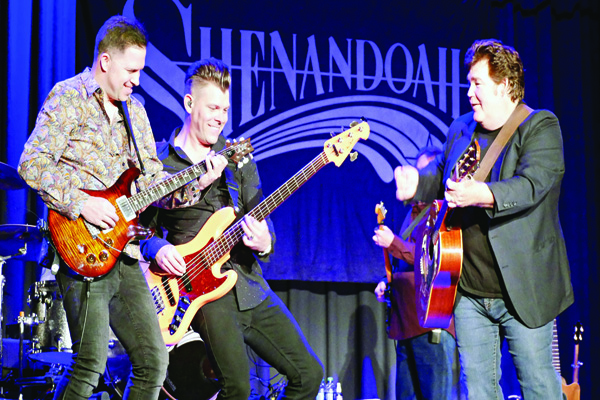 A former Butler County boy came home, brought his friends–and it was a sweet homecoming, indeed.

Marty Raybon, lead singer of the legendary country group Shenandoah, and his bandmates arrived on a big coach, bringing with them a veritable busload of hits to the Camellia City Thursday afternoon.

With a sold-out theater, patrons lined up early in order to claim their favorite spots. They proved to be an enthusiastic audience, welcoming the open bars of each of Shenandoah’s hits with whoops, whistles and appreciative claps. Raybon, with a voice that is still as smooth and brimming with sincerity as it was in 1984 when Shenandoah was founded, encouraged listeners to join in on a number of tunes.

Chartmakers like “Sunday in the South,” “Ghost in the House,” “Somewhere in the Vicinity of the Heart,” “The Church on Cumberland Road” and “Next to You, Next to Me” were crowd pleasers, along with tunes from the band’s most recent release.

In addition to Shenandoah’s hits, the band also performed a medley of classics from other artists who had recorded in the legendary Muscle Shoals recording studio.

Salley, who performed in the same capacity for the Grammy Award-winning group The Steeldrivers when they performed at the Ritz two years ago, has also just been recognized by the International Bluegrass Music Association as Songwriter of the Year.

A native of Chillicothe, Ohio, Salley has penned hits for the likes of Chris Stapleton, Brad Paisley and Reba McIntyre, not to mention a gospel song now featured in the Southern Baptist Hymn and a charted single for Sir Elton John.

The versatile Salley performed many of his own compositions along with tunes by some of his favorite songwriters. The genial performer interspersed music with humorous tall tales and stories of his life as a songwriter, husband and father.

“You are so fortunate to have this beautiful theater here in your town where you can all enjoy music together,” said Salley.

And Shenandoah plans to return to “this beautiful theater” in December 2019. Raybon said the band is looking at setting up two Ritz performances, a matinee and an evening performance, on a date as yet to be determined.

“We know some people didn’t get to be here tonight because of selling out the tickets, so we want to come back and do two shows. The first half would be Christmas music and the second half, our hits,” said Raybon. His words were met with a roar of approval from his audience, who ended up on their feet for the last few numbers of the show.