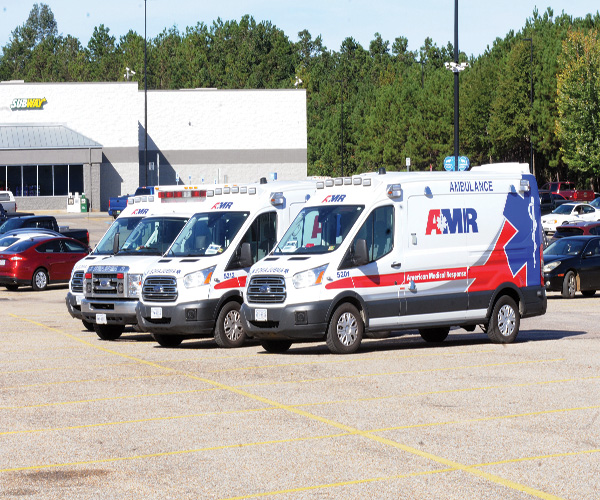 Storm evacuees and Alabama Power Company employees filled hotels in Greenville to capacity Wednesday as Hurricane Michael made landfall along the Gulf Coast.

After Gov. Kay Ivey issued a State of Emergency Tuesday, the Holiday Inn Express was able to waive the cancelation fee and the restriction of pets for all guests, providing shelter for those in the line of the storm. Because of the evacuation ordered by Bay County in Florida, many people left homes on Wednesday unsure of the days ahead.

“Tonight, we only have evacuees and Alabama Power linemen,” she said. “They all are very nice, and we are trying to help them as much as we can.”

In the community room of the hotel, many guests congregated around the television broadcasting the latest on the storm. Among the group was Panama City Beach resident Phillip Pfoertner. An engineering manager for Huntington Ingalls Industries located in the heart of Panama City Beach, Pfoertner evacuated with his wife on Tuesday. Because of the location of the couple’s home, the couple was required to leave.

“We left yesterday,” he said. “The traffic wasn’t too horrible, but they had started closing down, going south on I-10. They had evacuation routes set up so we just followed those. They had some minor back ups, but nothing too terrible.”

Pfoertner said they were happy to find Greenville.

“It was a convenient place to come, wasn’t too far, but far enough,” he said. “The Holiday Inn Express here is absolutely fabulous; they have taken care of us. They’ve done a great job and everyone in town has been super nice to us.”

With this unforeseen visit, Pfoertner told of his experiences in the past with storms.

“We have been there 15 years now,” he said. “We were down there before for some minor ones (hurricanes) and tropical storms, but this has been projected to be one of the worst. We just have never left before.”

Along with the Holiday Inn Express, the Hampton Inn and Best Western both were booked solid Wednesday night. According to both front desk managers, the rooms were filled with storm evacuees and linemen, and they both expected more in the hours ahead in the few rooms left.

For one couple at the Best Western, evacuation was not as easy as it was for the Pfoertners. Jaime McDaniels and Russell Coward left homes located blocks from the beach.

“We live right there in the middle of it,” Cowards said. “We live across from County Pier.”

Staying until the last possible hour, the two did not leave until 5:30 Wednesday morning.

“It (the drive) was easy today,” McDaniels said. “We waited to last minute because we didn’t think the storm was going to be that big and we got up this morning and it was horrible. So we left at 5:30 this morning.”

With less traffic, the two considered themselves lucky, until it came time to find lodging.

“It took us seven hours to find a hotel,” McDaniels said. “There was no place to stop along the way. We probably stopped at 40 hotels from here to the beach. We hadn’t slept in 36 hours. It was awful.”

Thankfully the two had stocked up on storm supplies before leaving.

“We stocked up before at the house,” McDaniels added. “When we decided to leave, we threw it all in the cars knowing we could at least use it at the hotel. The deciding factor came down to the storm surge the morning before Hurricane Michael made landfall. We went to the beach every hour or so on Tuesday to check the water, to see how inland it had come. By 3 a.m. Wednesday morning, it had gotten to the bottom of the stairs of the boardwalk. I have never seen water that high.”

Leaving family behind in a location more inland, McDaniels received confirmation of a building collapsing near the beach moments after the storm had made landfall.

“We left my brother and future sister-in-law and my nephews are still there,” he said. “They went to a friend’s house more further back from the beach, but I just got a video from my sister-in-law. She posted a building collapsing.”

Roughly 375,000 individuals, like these storm victims, were warned to evacuate, and based on the aftermath, these evacuees were smart to leave. According to the National Weather Service, Hurricane Michael made landfall as an unprecedented high-end Category 4 Hurricane. With sustained wind speeds of 155 mph, the storm caused catastrophic damage from wind and storm surge in Panama City Beach and Mexico Beach. As of Friday morning, a total of 11 deaths had been reported.

For Butler County, the damage was minimum, making Greenville a safe place for storm victims. According to Meteorologist Spinks Megginson with Red Zone Weather, the rainfall was very small compared to those in the direct path of the storm. Along with his best estimates of 15-25 mph sustained winds and 35 mph at peak.

“The western side of Butler County had just over 0.5” of rain,” Megginson concluded. “The eastern side had 1.5-2” depending on the spot – steep gradient over very small area, as was expected.”

From the depths of addiction to a life of…