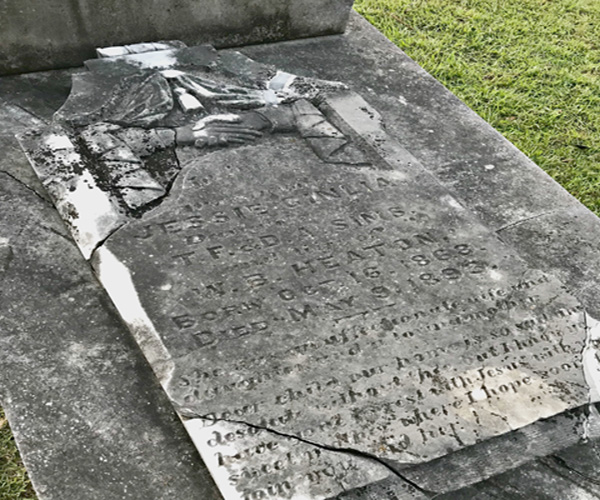 We are accustomed to seeing figures of angels, symbols of spirituality, in cemeteries. But there is so much more to discover than these winged heavenly beings when we walk among the tombstones.

From clasped hands to draped urns and broken columns, funereal art and architecture has a special meaning, much of it lost over time.

Mollie Waters, LBWCC literature/speech/drama instructor and lover of local lore and history, shared many of these “stories in stone” with more than 70 participants last Saturday at Magnolia Cemetery. It was the first of four historic cemetery walking tours scheduled for the month of October in and around the Camellia City.

The cemetery, located across from Dunklin’s Funeral Home on Highway 10, actually started out as a much smaller cemetery known as Pine Crest, Water explained.

“After Pioneer Cemetery downtown became full, they looked at expanding Pine Crest in several directions . . . in 1862, the new cemetery, already known as Magnolia, absorbed Pine Crest into it.”

The wrought-iron fences surrounding Magnolia have an interesting history.

“In 1861 Jefferson Davis became the president of the Confederacy and the small wrought-iron fences once surrounding the Capitol are what you see here around this cemetery. I have also learned that in expanding the cemetery, they had to remove some of this fencing, which is now in storage,” Waters said.

She went on to share information about almost 30 gravesites in Magnolia during the late afternoon walk.

“Victorians were professional mourners. In many ways, they took on mourning as a business. Queen Victoria lost her husband Prince Albert at an early age and she mourned his passing for the rest of her long life. Victorian society reflected that,” Waters explained.

Flowers and plants became popular gravesite symbols during the Victorian era, including ferns (“humility, frankness, sincerity and solitude”), palms (“associated with Easter, these signified triumph over death and a forthcoming resurrection”) and ivy (“immortality, fidelity, attachment, friendship and undying affection with its three-pointed leaves said to represent the Holy Trinity”).

Waters said roses were another flower popular on tombstones, offering several meanings depending on the number of roses, and if the rose was in bud or bloom.

“The rose itself symbolizes love, hope and beauty. Two roses joined together symbolizes a strong bond and is usually found on the grave of a couple. A wreath of roses represents beauty and virtue, while a rose bud symbolizes the grave of a child,” Waters explained. “A partial bloom was used to represent someone who had died in his or her teen or early adult years—a life cut short. A full bloom signified someone in the prime of life. And a broken blossom, whether of a rose or any other flower, indicated someone who died too young.”

Animals also make appearances on old gravesites, with lambs, representing innocence and the Lamb of God, often seen on the graves of children, in particular infants.

“Doves represent resurrection, innocence and peace—ascending, they are transporting the soul to heaven; descending, assurance of a safe passage. Lying dead symbolizes a life cut short, while a dove holding an olive branch indicates the soul has found heavenly peace.”

“Oftentimes the ornamentation on these iron graves would rust over time and break off, and these are fully intact with the baby figurine and the full covering still there . . . we will talk more about these cast iron graves in our future tours.”

Hands are frequently featured on antique tombstones. “When you see shaking hands, if they have a man’s sleeve and a woman’s sleeve, it symbolizes a couple; if the sleeves are gender-neutral, it represents   someone being welcomed into heaven or them bidding farewell to earth,” Waters said.

While hands may point upwards to indicate the belief the loved one was now in heaven, there are cases where a hand points downward on a tombstone—including one within Magnolia.

“Now this doesn’t mean what you think it means,” Waters said with a smile. “There used to be a discomfort with representing God in a graven image, but the Bible frequently references the hand of God or the arm of God. If you look closely, you can see this hand has a broken chain, and that symbolizes God breaking the chains that bind us to earth.”

“Here on this grave you see an obelisk, and obelisks date back to ancient Egypt. They represent rays of sunlight . . . and this family gravesite for the Peagler family features something very special. Notice the bench, called an exedra, which is Greek for ‘out of a seat,’” said Waters as she pointed out the large curved bench topping the graves. “Greek law didn’t allow burial in the city, so people would travel to the country to gather and celebrate their loved ones with food, wine and special offerings. The exedrae gave them places to sit during their visits.”

Also at the Peagler gravesite: an unusual sundial representing time and emblems denoting the Knights of Pythias, the Freemasons and the Shriners.

Other classical influences on cemetery art and architecture include the frequent use of columns and urns, such as those on the Steiner gravesites, Waters said.

“A broken column indicates a life cut short, and a shrouded column symbolizes the separation of the living from the dead. In ancient times, many people were cremated and their ashes were stored in urns. A cloth over the urn symbolically protects those remains,” explained Waters. “If you have ever heard the expression ‘Gone to pot’ this is where it comes from. The pot refers to the urn, and so you’re nothing but ashes if you have gone to pot.”

Waters also pointed out some of the cemetery’s most distinguished inhabitants.

“That full body statue over there is one of only two in this area, the other being in Pine Apple. Once this cemetery was segregated, and that was where the African-American people were buried. They had a pastor, F.W. Ward, who was so well loved and respected, they commissioned this sculpture for his gravesite to remember him,” Waters said.

One of Butler County’s best-known soldiers, Sgt. William Frazer, a veteran of the bloody Battle of Croix Rouge Farm in WWI, is also laid to rest in the cemetery. His son, Nimrod Frazer, wrote about his father and his war experiences in “Send the Alabamians.”

In addition, one of tourgoer Claudia Lewis’s ancestors buried at Magnolia, was captured at the Battle of Nashville during the Civil War. Others who died in battles around the world are not necessarily buried in Magnolia, but have headstones remembering them in the cemetery.

For all those wishing to learn more about funereal art and architecture, Waters recommends the book “Stories In Stone” by David Keister.

Pioneer Cemetery in downtown Greenville is the next tour site, slated for 6 p.m. this Saturday, Oct. 13. Admission is $5 per person with all proceeds going to cemetery preservation.