From the depths of addiction to a life of ministry, Crysell shares his story 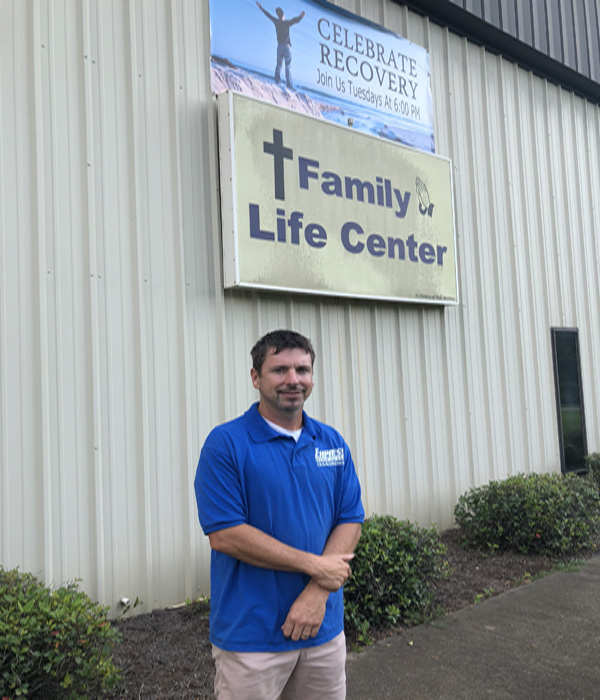 While he spends a good bit of time on rooftops throughout Butler County, Ricky Crysell said his most important work is done through ministry.

Crysell owns and operates Express Roofing out of Greenville, and he is the director of Celebrate Recovery at the First Assembly of God on North Conecuh Street.

The program was started in July, and since then Crysell said the attendance has grown each week. Celebrate Recovery meets every Tuesday beginning at 6:00 p.m. inside the First Assembly of God.

“Celebrate Recovery is a program that offers people with all kinds of issues an environment to talk about their problems with people who are going through the same kinds of things,” he said. “While we talk with a lot of people who have drug addictions, we also have people that are going through a divorce, lost a child or have depression. A lot of the people who come have already shown progress. It’s been a blessing to say the least.”

Crysell’s road from his own addictions to director of Celebrate Recovery was a long and winding one. As a child in Greenville, Crysell grew up without a father after his death when Crysell was seven-years-old. It was from that point that Crysell said his life veered in the wrong direction.

Crysell said at the age of 15 he was drinking, and using methamphetamine. He dropped out of school and shortly after moved to South Carolina where he worked in construction.

“The crowd I hung around in South Carolina was no better than what I was doing in Greenville,” he said. “I became addicted to cocaine, alcohol and was doing a lot of other despicable things. I was truly lost, and finally had a moment in my life when things turned around.”

In early September of 2001 Crysell said he began to yearn for a better life, and the ability to get passed his addictions.

“To be honest, I don’t know what it was,” he said. “All I remember is just feeling this sickness come over me. That’s when I asked Jesus to come into my life and heal me. I was a filthy joke of a man and I needed to change. I asked God to make his presence known. Then September 11 happened.”

“Lane Simmons, who is still the pastor at First Assembly of God, was preaching that morning,” he said. “His words were directed right at me, and I broke down into tears. I went to the front of the church where Lane and I shared a moment. That was the day I felt a father’s love for the first time. I knew that God was real because of 9/11, and Lane’s message that day was what I needed to make me finally change.”

By December of 2001, Crysell had moved back to Greenville and shortly after started Express Roofing. His experience with a Celebrate Recovery group San Tuck led him to organize the group in Greenville. Crysell and his wife live in Greenville where they raise five children. He is also the minister at Shiloh Baptist Church on Ridge Road and Sherling Lake Road.

“God has brought me a long way from where I was,” he concluded. “If I can make it out of addiction, anyone can. Celebrate Recovery is here to help anyone dealing with tough times. I hope anyone who feels they need the help will come and see us.”