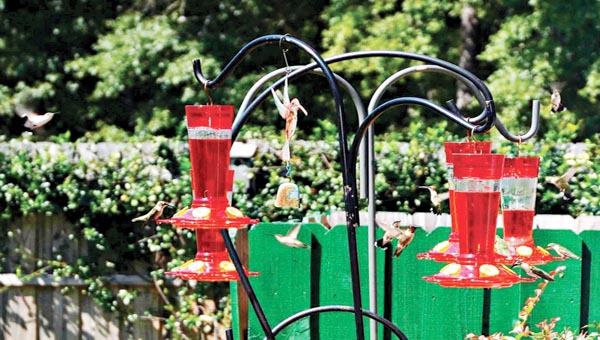 Greenville and Butler County are being overrun by little flying critters with spears on their heads. Bet you have a few in your yard or neighborhood and you may be like John and Kenny Hall who live on Independent Circle in Greenville. They’ve got over 100 of the little flying buzz balls. I’m talking about hummingbirds–and there is a bumper crop this year.

John called me at 6:30 a.m. a few days ago. He was really excited. “Charlie, are you up?” was the first thing I heard. I was up but not sure I was fully awake. “You’ve got to come over here and see all these hummers”, John continued. He went on to say that he had 20 feeders in his yard and at least 100 birds. I asked John when would be a good time to come and he said, “right now!” I definitely thought it would be worth the trip but John agreed that 8 a.m. would be OK instead of “right now!”

John was not exaggerating. He did have 20 feeders, and 100 birds was a conservative estimate. Most folks will guess low on the size of a flock of birds. Charles Newton called several years ago to let me know that “25 or so” white pelicans were on his pond. I went to take a look and counted 105.

Birds were buzzing about like bees around John’s feeders and as usual they were waging all out war on each other. I’ve been a serious bird watcher for over 40 years and I’ve never seen as many hummingbirds in one spot, not even in southeast Arizona, which is the hummingbird capital of the USA. I spent about an hour watching hummers and visiting with John and his brother Kenny. Very pleasant place to sit and watch birds. I hated to leave.

I’ve been doing most of my hummingbird watching lately with a bunch of “good ol’ boys” who sit on the camphouse porch at Conservation Lake most afternoons. While telling tales that are mostly lies and coming up with solutions for the world’s problems, we pause occasionally to watch a heron or duck on the lake. Last week an osprey stayed for a few days which was neat. The hummingbirds swarming around the feeders strung across the front of the porch have been our preferred cheap entertainment for the past few weeks. We’ve got a lot of birds, but nothing like the number at John’s.

In late summer all the ruby-throated hummingbirds in the eastern U.S. start moving south, preparing to fly across the Gulf to spend the winter in the tropics. They go into a feeding frenzy. They’ve got to double their body weight to avoid running out of gas during the 25 hour flight across open water. There is no doubt that hummingbird feeders are an excellent resource for migrating hummers.

If you want to get in on the hummingbird fiesta, get a feeder (or 20) and a bag of sugar. Make a mix of one part sugar to four parts water. Or if you prefer you can get the red pre-mixed hummer nectar but it’s not necessary if your feeder is red. Make up a pitcher of lemonade, invite some good ol’ boys over, and enjoy the show.