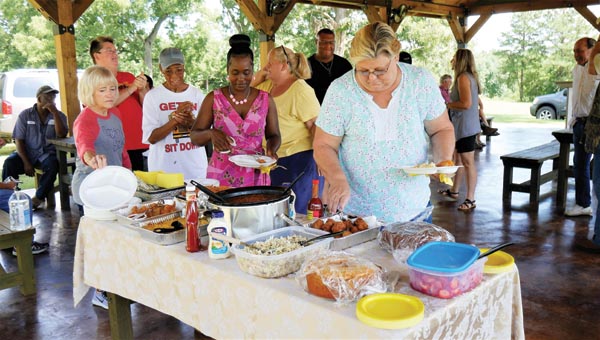 It’s a tough job, one that requires patience, fortitude and no small degree of a sense of humor.

Hope Afield founder Ken Kilpatrick says he discovered that after just one week of serving as bus driver with the Butler County Schools System.

“These are some of the most under-appreciated people out there—and I told my wife, Jan, that we had to do something to show our appreciation for what they do day after day.”

With an abundant supply of farm-raised catfish supplied by Hope Afield supporter Freddy Daughtry and expert cook Robert Taylor to fry it, the Kilpatricks treated the county’s bus drivers, mechanics and support personnel to lunch with all the trimmings last Friday.

Everyone met beneath the pavilion constructed by Daughtry in memory of his late son, Reid, to enjoy freshly fried fish fillets, baked beans, potato casserole, slaw and for dessert, chocolate or vanilla poundcake with fresh sliced strawberries.

From the youngest driver present (29) to the oldest (a tie at 67), those in attendance had their fill and got to take home plates to share with family and friends.

They also learned about the mission of Hope Afield at Blessings Farm—to help disadvantaged youth from both Lowndes and Butler counties to gain personal confidence and practical knowledge through work and play in the healing environment of the Great Outdoors.

“We had been working with kids in need for almost 25 years in Montgomery, but decided to move our operations here to Butler County in 2016. Our kids get to go fishing, camping, horseback riding and more out here on Blessings Farm,” Kilpatrick explained.

“We are so thankful for this beautiful pavilion that Freddy Daughtry built for us, and we have plans to construct bathrooms and a full kitchen out here, too,” he added.

Dr. John Strycker, BCSS superintendent, was also in attendance. Strycker expressed his appreciation to the Kilpatricks for the event in support of the system’s transportation system employees, and said that Butler County BOE also planned to honor the drivers and mechanics in a meeting later in the year.