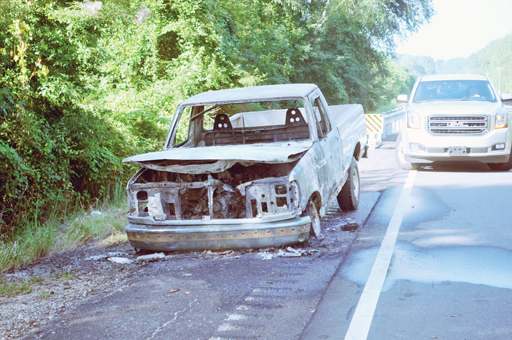 At around 10 a.m. Monday morning, motorists traveling along Highway 31 were in for a surprise as a pick-up truck caught fire near the Highway 185 junction.

The driver of the truck, a female, was not hurt in the incident. According to Butler County Sheriff Kenny Harden, the female driver said she pulled over because the truck was making strange sounds.

“She said she started hearing a lot of popping noises and thought she should pull to the side,” Harden said. “Shortly after she did that, the truck was engulfed in flames. Thankfully she was able to get out with no injuries.”

Liberty Volunteer Fire Department responded to the scene and extinguished the flames. The driver pulled the truck to the northbound side of the highway. Both lanes were closed for a time while the flames were put out.

Traffic was once again moving shortly after fire crews and Butler County deputies were off the scene. No injuries were reported.