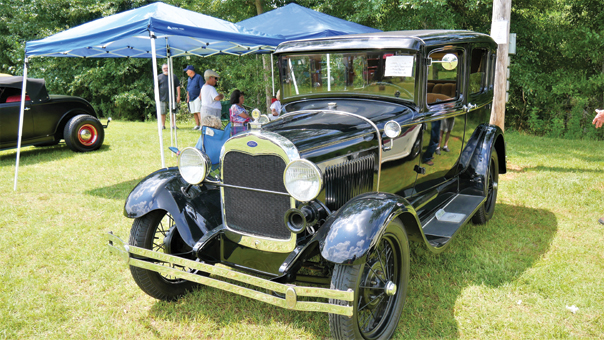 Car enthusiasts from across the region came together in the Camellia City last Saturday to enjoy hot rods, cool convertibles, sleek sedans and pristine vintage pickups. It was the latest edition of the Fast and Furry Car Show and Arts and Crafts, an annual fundraiser in support of the Greenville Animal Shelter.

There were entrants from across Alabama, Georgia, Florida and from as far away as Indiana, with more than 50 cars, trucks and motorcycles from the 1920s through the 21st century on display at the Butler County Fairgrounds.

Along with all those vehicles, attendees got to browse among the wares of several vendors offering custom wreaths, handmade jewelry, wooden toys and wood crafts, vintage license plates, original art, embroidered children’s clothing and accessories and sweet home-baked treats to eat along with concessions provided by the McKenzie Football Boosters.

“I had stopped at Petra Brown’s booth and looked but I didn’t even see this until I’d walked on down and happened to glance back. My front door is so dark. This will be perfect against it,” said car show attendee Linda Morton, holding up the bright yellow mesh sunflower wreath she had purchased.

Popular local duo “Two of a Kind” performed two acoustic sets on the fairground stage. Youngsters bounced and slid on the giant inflatable, taking breaks in the summer heat to squirt themselves with water bottles and cool down with some of the hand fans given away by Abbie Ballew, whose State Farm Agency was one of the event’s sponsors.

Ballew and her State Farm crew presented their sponsor award to Walter Faulk of Jack, Ala. for his candy apple red Art Deco-inspired 1941 pickup.

“We all fell in love with it,” said Ballew. “A beautiful truck and such sweet owners, too.”

And it was Georgiana’s own Carlton Cook whose 1985 Ford Mustang took “Best Hot Rod” at the show.

Luverne’s Steve Brooks garnered a “Best Off-Road” trophy for his fire engine red 1989 Chevy 1500, while Curtis McLoud’s 1972 Chevy Rat Rod pickup earned him the trophy for “Diamond in the Rough.”

The “Pick of the Litter” trophy, awarded by the Greenville Animal Shelter, went to Carrel and Sheila King of Luverne’s bright red 1965 Mustang.

Eric Pierce of Montgomery’s 1966 Studebaker Wagonaire, which likely brought back many memories of family road trips for baby boomers in attendance, took the trophy for “Best Engine.”

While Sam Richey of Rocksport, Ind.’s snazzy red and black Slingshot SL three-wheeler didn’t win any trophies, he said he had a great time in Greenville.

“I love getting to go places, meet people and talk about cars,” Richey said. “It was a great way to spend the day.”

The Garlocks founded and continue to organize the annual event to bring together their love for classic cars with a desire to help the county’s homeless animals.

“We want to thank all our sponsors, vendors, the entrants and everyone who turn out to help make this a success each year. It means a lot to us,” said Kayla Garlock.