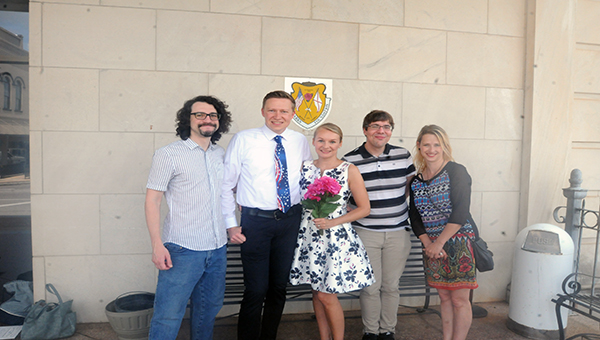 The year 1997-98 was a very significant time for 12 students at Greenville High School. Celebrating 20 years since participating in the foreign exchange program as juniors at the school, 4 former students returned to Greenville on Wednesday to celebrate. Little did they know that fellow classmate Nina Holley and her husband Sven Adam of Hamburg, Germany planned to be reunited in holy matrimony at the Butler County Courthouse in Greenville.

“My dream was to get married over here, but he (Sven) said that I could not do that to my family,” Holley said. “So, we had a wedding in Germany and then came here.”

Holley was a member of the foreign exchange program in Greenville her junior year of high school. Upon returning to Germany, she met the love of her life, Sven. After 18 years of dating, the two tied the knot at a lighthouse on the North Sea in Germany on July 6. As special as that day was, she dreamed of a small town wedding in the town where she had spent her year studying abroad.

“I wanted my host family to be apart of our wedding,” she said. “So we had a ceremony here, and it was a surprise for our parents in Germany.”

Not only surprising family, the couple surprised fellow classmates that thought they were coming for a twenty-year reunion and road trip celebration. Classmate Andre Losso of Curitiba, Brazil commented, “No one knew. We got our invitations on Monday.”

A special way to include a piece of Holley’s youth, the newly weds had a very eventful day after the wedding on Wednesday.

“We went to Cracker Barrell and had southern food,” she said. “Then we went to my host family’s home for a reception and pool party. We really like to drink the ice tea over here.”

During this time, the excitement was only magnified by the joyous reunion of the classmates. Along with Andres Losso and Nina Holley, Anja Braunschweig of Dresden, Germany and Wolfgang Mulzer of Berlin, Germany attended the reunion. Looking back over the past twenty years, all four of the students have grown and excelled in life since the junior year spent in Greenville.

“After 20 years, we are sitting here and chatting about all of these things, because of this experience we realize the difference it made in our lives,” Holley said. “It really opened our eyes to different nationalities and school systems.”

All four of the students have lived very different lives. Holley now works as a news journalist at a newspaper in Hamburg titled, “Die Welt,” meaning “The World.” Braunschweig settled in Dresden and is a public school teacher, impacting youth in Germany. Mulzer, “The smartest one of us all,” said Holley, now serves as a professor at the University of Berlin. Holley and Braunschweig both recalled a difficult math class they took with Mulzer.

“He understood everything better than us,” Braunschweig said. “We attended Mrs. Jones math class. He was a teacher for us.”

Because of him the two were convinced he was the reason for the good grade each received. Finally, Andre Loso lives in Brazil considers himself an entrepreneur, managing a hotel and real estate office.

Looking back over the twenty years, the group has only reunited one other time.

“We met each other at Pisa 10 years ago,” Braunschweig said.

At this reunion the groom, Sven was first introduced to the group. Since then Braunschweig added, “Sven is now a member of us. He knows everyone and we like him.”

Each classmate had so many memories on the streets of Greenville. Recalling the “Old Walmart” as their favorite spot to hang out in high school, the group told of stories growing up in the Camellia City. The year nonetheless had a huge impact on the students.

“You could choose a region where you wanted to go,” Holley said. “I chose the area between Florida and California. When I was assigned Alabama I had no clue where it was on the map.”

Now, Holley could not imagine her life without an Alabama address at one point in her life.

“If we wouldn’t have come here we would have missed out on a life-time friendship,” Holley added. “We are the best of friends, even if we haven’t seen each other in long years, we pick up right where we left off.”

Over the years the group has kept in touch through various forms of communication.

“At first we wrote letters to each other,” Holley said. “I remember I had a book with everyone’s addresses in it.”

Now the group is all Facebook friends and is able to communicate more freely. In fact, Sven was sure that after this trip, the other classmates unable to attend would soon be asking for another reunion.

“Since there are more exchange students we normally have to repeat it,” Loso. “So Nina will have to organize it again.”

After the sojourn in Greenville, the group will continue their travels to West Virginia making exciting stops along the way.

All in all, the class reunion was a success.

“I think it is awesome to be back here,” Holley concluded. “I do not feel older or that it is 20 years later, I still feel like I am 17.”