Rest area at mile 133 closed for the weekend 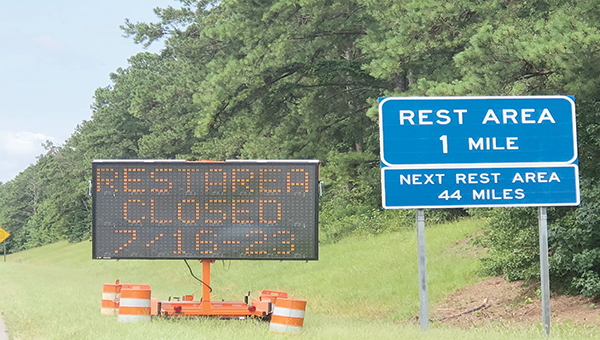 Motorists traveling southbound on Interstate 65 won’t be able to find rest at exit 133 until the weekend.

The rest area at milepost 133 was closed on Monday and will remain closed through the weekend. According to Brantley Kirk, public information officer with the Alabama Department of Transportation, the rest area’s bathrooms are receiving upgrades based on requirements set by the American Disabilities Act (ADA) of 1990.

“The rest area will remain closed until the weekend,” she said. “After those renovations are made, the northbound rest stop at milepost 132 will receive upgrades as well. There has been no official date set for the northbound side yet, but it should be within the month.”

According to a report from ALDOT published in September 2016, the rest areas at mileposts 132 and 133 have been in need of renovations. In the report, it stated that ALDOT had retained the services of Barge, Waggoner, Sumner and Cannon, Inc., in October 2015 to perform and assessment of the ADA accessibility of the ALDOT welcome centers and rest centers.

The assessment identified 13 facilities – four welcome centers and nine rest areas – that did not provide an accessible restroom due to non-compliant doorway, interior path or toilet stall dimensions. The rest areas at mileposts 132 and 133 in Butler County were included on the list.

The following list outlines the renovations that will be made to the southbound and northbound rest areas: