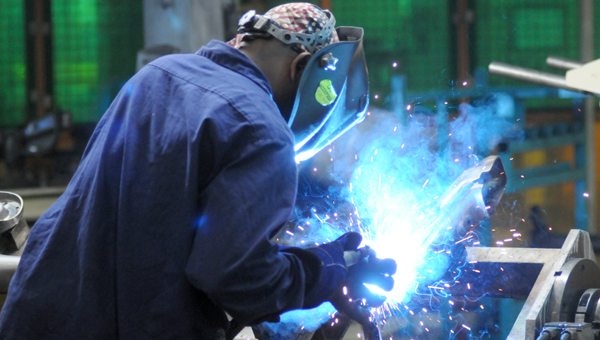 It remains unknown how President Trump’s planned tariffs on steel and aluminum will impact local businesses. The automotive manufacturing industry, of which Hysco and Hwashin are a part, is eyeing the looming trade war with particular interest.

In early March 2018, President Donald Trump ordered tariffs to be placed on imported steel, at 25 percent, and aluminum, at 10 percent.

Trump took to Twitter to contextualize the move, essentially arguing for the revitalization of the “dead” steel industry.

Reactions have so far been mixed, particularly in the GOP.

Republican House Speaker Paul Ryan issued a statement opposing the tariffs, while Senators from agricultural states such as Nebraska’s Deb Fischer have spoken out against the tariffs following China’s retaliatory tariffs on imported U.S. agricultural products.

Among manufacturers, representatives of the automotive industry have had uniformly negative reactions to the tariffs.

Alabama has, over the last few decades, become a new automotive manufacturing hub.

According to the Alabama Department of Commerce, in 2017 “Alabama automakers combined to produce around 1 million cars and light trucks, and 1.7 million engines.”

Hyundai Steel and Hwashin- which recently announced a $23 million expansion- are both suppliers to Hyundai (and in Hwashin’s case, Kia), and are the representatives of the industry in Greenville.

In a statement to Bloomberg, Hyundai representative Jim Trainor said “Changes to the existing tariff structure could negatively impact our current U.S. production and further expansion.”

“Imposing tariffs on steel could increase production costs, which could lead to higher prices for U.S. consumers, and, potentially, decreased demand,” he continued.

A Honda spokesman, echoing similar sentiments expressed by other auto manufacturers, cited the fear of “unnecessary financial burden on… customers” in a statement to Bloomberg.

Still, apart from retaliatory tariffs issued by China, the EU, and others, the exact effects of the tariffs remain to be seen.

David Hutchison, executive director of Butler County Commission for Economic Development, recommended a tempered, wait-and-see approach to assessing the tariffs, pointing out that the specifications, and possible international exemptions, have still not been entirely finalized.

“… The thing you have to look at from a steel standpoint, there are different kinds of steel for different purposes… I have to wonder if we turn off the “import switch” and turn on the “domestic switch,” I just wonder if would, for example, would U.S. steel have the ability to increase- do they have 20%, 30% excess capacity, and would they be able to do the types of engineered steel for manufacturing?” Hutchison said.

On the possibilities of direct local effects, Hutchison said, “There’s been rumors for years, that [the Hyundai plant in Montgomery] is going to expand, and that hasn’t happened yet. What happens when, if the tariffs actually take place, what happens with the expansion plans? Because whatever happens, or doesn’t happen, with those expansions plans will directly affect Hyundai Steel, Hwashin, and AIA Recycling.”