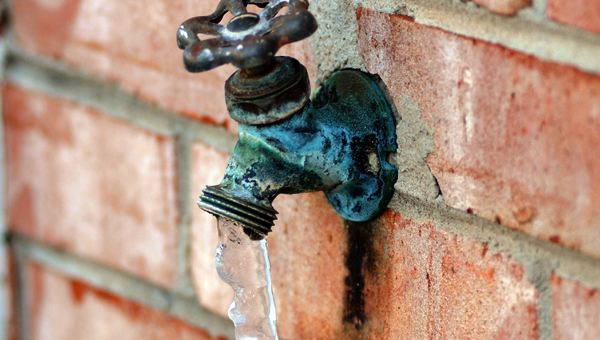 The Butler County Emergency Management Agency warns of a hard freeze approaching in the new year. During such weather, frozen faucets and icicles hanging from the overpass are common occurrences.

The Butler County EMA, along with the National Weather Service, have issued a statement declaring that “confidence remains high that a much colder air mass [will be] moving into the region beginning New Year’s Eve” and lingering for the entirety of the following week. Temperatures, even during the day, will likely peak in the 30’s. Wind chill, especially on New Year’s Day, will cause the air outside to feel like single-digit cold. The NWS also warns of “rain that could be mixed with sleet… in the evening hours on New Year’s Eve.”

Preparation and safety are especially important when such uncommonly low temperatures arrive in the region.

The EMA is warning of a “hard freeze,” which necessitates citizens take extra precautions in the face of low temperatures. Butler County EMA director Kris Ware had a range of advice regarding the low temperatures.

“If you do have to go outdoors, make sure to wear layers, wear a cap on your head to keep the heat in” said Ware, “but stay indoors as much as possible.”

Regarding preparation of the home, Ware referenced the “3 P’s”- pipes, pets, and plants. Pets that are usually kept outside should, if at all possible, be brought inside. A pet shivering is an obvious sign that their bodies are attempting to stay warm, an indication that they should be moved to a warmer area.

Exposed pipes should be wrapped with insulation and hoses detached from outside faucets.

Covering outside faucets with insulation can also prevent them from damage.

Potted plants also face danger from the cold, so those should be brought inside or otherwise moved out of direct contact with the elements.

Elderly and special needs people, especially those who live alone, can be the most vulnerable in freezing conditions. “Make sure your neighbors are ok… check on them, make sure they have adequate heat, especially those that are prone to sit there and not realize how cold they are,” said Ware.

The Butler County EMA also issued a statement regarding space heaters. Space heaters can effectively warm rooms, but require diligence and precaution when utilized to avoid fire hazards. Some of the safety tips in the notice include “keep[ing] the heater at least 3 feet from anything that can burn, placing the heater on a solid, flat surface and not using extension cords with a space heater.” Space heaters should also be unplugged when leaving the house and going to bed.

The icing of roads is not expected to be a particular concern, but motorists should still use caution especially over the New Year’s weekend. The EMA predicts that hard freeze warnings and wind chill advisories will be in effect throughout the week.