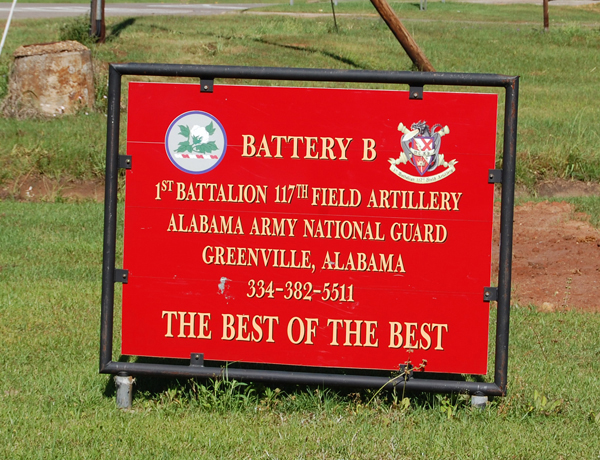 The Alabama Army National Guard’s Construction and Facilities Management Office held a planning and programming charrette at Sherling Lake Lodge Thursday. Local government, education, and business leaders were present to discuss how future Alabama National Guard facilities can be dual-construction, shared-space facilities to benefit the whole community while still serving the mission of the Guard.

Greenville Mayor Dexter McLendon welcomed the staff from the Alabama Guard. “I can’t tell you how excited we are to have you here today,” McLendon said. He went on to talk about several initiatives the city and local area are engaged in and the possibility of partnering on some of them.

A new National Guard facility in Greenville is a matter that has often been discussed in recent years, dating back to talks of a super armory installation in 2013. A super armory is defined as a central training point for units across the state.

In 2014, city officials paid nearly $2,000 to survey the Fort Robert E. Steiner site as a precursor to swapping property with the National Guard.

In June 2016, the Greenville City Council authorized the purchase of 40 acres of land located near Manningham Loop and I-65 between exits 128 and 130. The plan was for the city to buy the property for $60,000 from Soterra, LLC, and swap it with the National Guard for Fort Robert E. Steiner.

Greenville has been without an armory since December 2011, when National Guard officials closed Fort Robert E. Steiner, which was located in Greenville for 58 years. It was one of 13 armories across the state that was closed in an effort to save approximately $7 million, according to officials with the National Guard.

Eric Gerritson, economic development specialist for the Alabama National Guard, spoke about shared facilities throughout the nation and how the Alabama Guard can do the same by sharing classrooms, parking, gym space, and kitchen areas with the potential to save millions of dollars in design and construction costs.

“We’re only limited by our imagination and by the law,” Clayton said, speaking of what type of facilities the Alabama Guard can build. “We don’t have to just build boxes.”

These shared-space buildings typically have dedicated sole-space for the National Guard and sole-space for any partner organization that each entity pays for, and shared space that has cost-sharing for maintenance and utilities.

Clayton also explained the new higher education benefits of the Alabama National Guard, which are now available when any new Soldier or Airman enlists.

The increased Alabama National Guard Education Assistance Program will pay thousands of dollars of semester toward a degree at any level or a trade certification.

John Strycker, superintendent of Butler County Schools, was excited about the potential of partnering K-12 schools with the Guard and the savings it could bring.

“The potential here is incredible,” said Strycker. “I almost can’t contain myself… The taxpayer is loving that. The community support you get from this is incredible. That’s what the taxpayer wants is the efficiency of tax dollars.”

“A planning and programming document charrette (PPDC) is an opportunity for the Alabama Army National Guard to explore design, planning considerations, and potential partner relationships with the local community,” said Clayton. “In a PPDC, we look for effective solutions to facilities that support affordable readiness and support the host community. We further identify unique agency requirements and develop narratives to explain functionality and mission support requirements.”

“We’re a really, really special place, and it is important that you all understand and see that, because we want to embrace what you’re doing and for you to be part of this great community,” McLendon said to the Alabama National Guard personnel. “We want to be a partnership… It would be a game changer.”