Arrest made in Highland for mischief 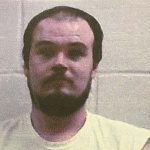 At approximately 12:20 a.m. Deputies Joey Dickey and Matthew Johnson were surveying the Highland Home School when he noticed a white Chevorlet Blazer in the south end of the football field.

“The vehicle went out onto the football field and started spinning donuts,” Crenshaw County sheriff Mickey Powell said. “The deputies shine the lights on him to get him to stop, and were talking to him when he sped off.

Peterson ran through the north gate of the football field while eluding the deputies. Powell says that the tag on the Blazer had been removed so that the vehicle could not be identified.

“He exited the football field going down New Bethel Road,” Powell said. “He then went into the Magnolia Shores area. The deputies backed off because they knew who he was.”

“Deputy Johnson went to school with him and recognized him,” Powell said. “This is ridiculous. This is a prime example of when patrolling, you never know when we’re going to pop up. There is no telling how bad he would have torn the football field up if the deputies hadn’t been at the right place at the right time.”

Costs of damages to Highland Home’s north gate are still being assessed. Powell says that the damages to the football field were minor.

“It should be ok with some dirt replacement and tender loving care,” Powell said. “It’s a shame though. It’s for the kids and they start football soon. This shows how little respect people have for personal property.”

Peterson has been released on bond.