A recent post on Facebook about a photo found in a thrift store in Jasper struck a chord with many who use the social media platform—and brought back memories of a beloved Greenville native who lost his life much too soon. 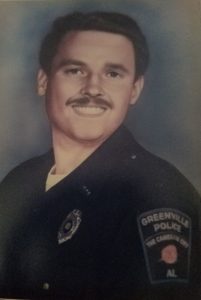 Pictured is the late Gary Heath, a Greenville Police Officer who gave his life in the line of duty in 1994. This photo of Heath, long thought lost, was recovered thanks to the power of Facebook.

On May 29, Sean Davis of Hayden, Ala., posted a photo. The image was of a handsome young dark-haired man with a broad smile. He was wearing a police uniform with a patch on his sleeve, “GREENVILLE POLICE The Camellia City AL” embroidered on it.

“My friend bought frames from the thrift store and it had this picture in it. I’m trying to find the family it belongs to. He was a Greenville, Ala., police officer…so let’s start sharing…”

And did they ever.

Shared more than 7,000 times, the smiling face was soon recognized by local citizens as being that of Gary Heath, a dedicated member of the Greenville Police Department.  Heath was killed in the line of duty on June 14, 1994, on a routine stop at a Greenville service station to check on the clerk. It’s believed the 25-year-old officer was ambushed when he walked in on a robbery in progress, with the suspect also shooting and killing the store clerk, Pamela Jean Scruggs.

As the photo of Heath kept appearing in various FB news feeds over the last several days, memories were shared by former classmates, co-workers and friends of someone described “as one of the good guys,” a former lineman for the Greenville Academy Tornados who had dreamed of a law enforcement career since childhood and aspired to become a DEA agent one day.

“I learned what a great guy Gary was . . . and I certainly would have never imagined my post would be shared that many times,” Davis said. “I have had such an outpouring of friend requests and messages since my posting.”

“I am planning to meet with the family after church on Sunday and return it to them,” Davis, who describes himself as a “God-fearing single dad of two amazing kids,” said. “I had one guy who wanted to buy it from me, but I said no, this is going back to the family. There’s no doubt about it, that is the right thing to do.”

Gary’s brother, Michael Heath, said his family was thrilled to have the photo back.  “The photograph was actually two pictures combined to make one photo.  It was something my mom had put together after Gary was killed, so it wasn’t a picture that we had a lot of copies of.”

Michael said the response received from Sean’s Facebook post was amazing.  “What really amazes me is how quickly people saw the Facebook post and immediately recognized Gary’s picture.  I had at least a hundred people, people from all over, offer to help return the photo to me,” Michael said.