Central Alabama Crimestoppers is offering a $1,000 reward for the location and arrest of bank robbery suspect Kelvin Golden. 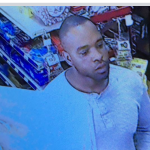 Earlier this month, a Crimestopper’s tip helped investigators identify Kelvin Carnell Golden as a suspect in a Georgiana bank robbery.

Golden is still at large. Crimestoppers is hoping that they can have the same success in his capture and is offering a $1,000 reward.

Due to Golden’s crime spree, Crimestoppers believes that his violent behavior can only escalate, increasing the danger to the public, law enforcement and to himself, and they urge Mr. Golden to turn himself in to law enforcement as soon as possible.

Golden began his crime spree on Monday, March 20 in Georgiana, where he is accused of robbing Trustmark Bank. On March 31, Golden traveled north and robbed the BB&T Bank in Pell City, Ala.

His last robbery was reported on April 4 in Greenville at the Hilltop Food Mart.

Golden is considered armed and dangerous.

Those who may know the current whereabouts of the suspect are asked to immediately call the police or Crimestoppers at 215-STOP.  The tip may lead to a cash reward.