A late-night domestic violence call escalated and was promptly deescalated courtesy of the Greenville Police Department, and now a Greenville man is behind bars. 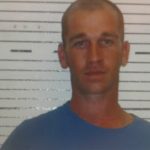 John McCullough, a 38-year-old white male, was charged with felony domestic violence, reckless endangerment, resisting arrest and two outstanding warrants for failing to appear on previous charges after a call for help led authorities to his Parmer Street residence shortly after 10 p.m. Sunday.

A female victim called 911 Sunday night and stated that McCullough assaulted her at a residence on Parmer Street.

Officers located the caller a short distance from the residence when they arrived at the scene when she stated that she and McCullough had an argument that led to her being grabbed and thrown to the ground.

She said that McCullough began to strangle her when another individual in the residence struck MuCullough from behind to get him off of her.

She and the other individual left the residence in an effort to flee from McCullough, and she also told officers that McCullough had a pistol in his possession.

According to Greenville Police Department chief Justin Lovvorn, it was then that authorities responded to the Parmer Street residence where the incident took place. But they didn’t quite make it in the door.

“They were about to enter the residence when someone called out from the wood line next to the residence and then two shots were fired from that area,” Lovvorn said.

“Officers took cover and began to set up a perimeter around the wooded area where the shots came from. A few minutes later, one more shot was fired from the wooded area.”

The Greenville Police Department’s Special Response Team was called to the scene in response to help secure the surrounding area.

The department of corrections was also contacted, which responded to the scene with tracking K-9 units. The Butler County Sheriff’s Office also assisted with the perimeter.

The search took authorities through a wooded area next to Parmer and South Pine streets, where the K-9 team led officers to McCullough, who was lying down in the woods in an attempt to hide.

McCullough was then taken into custody without incident.

Lovvorn added that he was proud of the response from his and other assisting teams considering the stressful situation, which was resolved with no injuries sustained by authorities or the suspect.

“Our law enforcement put themselves in harm’s way to ensure that no one else would be put at further risk because of this violent suspect,” Lovvorn said.

“I commend their actions and the job they do every day for the citizens of Greenville. I would like to thank the department of corrections and the Butler County Sheriff’s Department for their assistance in this matter, as well.”