The new emergency notification service CodeRED was put to the test two weeks ago in Crenshaw County, and its results exceeded all expectations.

On Sunday, Feb. 19th, a Highland Home teen was reported missing. Immediately, the Emergency Management Agency Director Elliot Jones put out a CodeRED alert through the county. The teen was found, and returned home within two hours.

“It wasn’t but a few minutes after the alert went out that the person who picked her up received the notification,” Jones said. 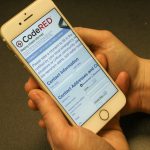 Crenshaw County Sheriff Mickey Powell says that his office began receiving tips on the teen’s sightings as soon as the notification was released.

“The person who had picked her up called, and gave us the information,” he said. “The deputies responded to the address, and talked to her.”

The teen was returned to her mother’s care with the help of Troy Police Department, and the Sheriff’s office.

“In less than two hours, we were talking to her,” Powell said. “So it’s going to be an awesome tool for the Sheriff’s office.”

CodeRED is not just a cellphone application. Notifications can be sent through landlines, and emails as well. Jones says that he has been throughout the county trying to make sure that residents are signed up for notifications.

“I’m still making my way around the county to meet with people,” Jones said. “It’s probably going to take about a year to get everyone signed up.”

Residents will receive emergency and weather notifications through CodeRED. The need to sign up is becoming pertinent for Crenshaw County residents because the county is in the process of eliminating emergency sirens.

“We couldn’t have put out information about a missing juvenile with the sirens,” Jones said. “We are making the effort to move into the 21st century.”

CodeRED is a free service for residents, but they must be registered within the database. Residents can register at public.coderedweb.com or visit Jones’s office at 118 E 3rd St. in Luverne. Jones also has cellphones available for the elderly to utilize the service if they do not have landlines or a cellphone.

“It’s a big safety issue for everybody,” Powell said. “If something comes up, and we need to notify the citizens in the whole county, we can immediately put this out. The other night was a prime example of the fact that it does work.”