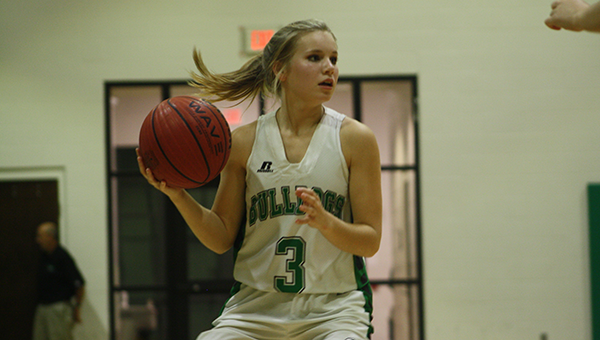 “I was really pleased with the way our guys played and competed. That’s been a trend here of late,” said Brantley High School Varsity Boys Coach Andre Parks.

“I think it started with an attitude change that we made as a team. I think it’s carried over into practice.”

The Brantley Bulldogs continue to take their opponents by storm, and with these wins behind them the team continues to see visions of area tournament hosts dancing in their heads.

The Brantley Bulldogs faced off against county rivals the Luverne Tigers last week, and after securing a win of 66-48, the team’s momentum was sky high and they readied to face Kinston.

“I was really pleased with how we set the tempo for that game early. We played with intensity, we had a great crowd for both schools,” Parks said.

“I think our guys kind of fed off that energy from our fans. We just kind of carried that momentum through to the end of the game.”

The Bulldogs brought home a 72-37 win over Kinston on Tuesday night. Leading the way for the Bulldogs was Parker Driggers with 20 points, followed by Adrian Person, Jr. with 19 points and D’andre Sinclair with 12 points and 10 rebounds.

“The biggest thing we’re starting to see right now is that we’re developing depth as a team. I think the guys that have been starters are playing consistently well, which is a good thing for us,” Parks said.

“But the thing that I’m really pleased with here lately is some of the guys that are coming off the bench are really playing well.”

The Bulldogs now prepare to take on the McKenzie Tigers tonight. The first time the Bulldogs and Tigers faced off, it resulted in a Bulldog victory.

A rematch between the Luverne Tigers and the Bulldogs will also take place on Monday at Luverne.