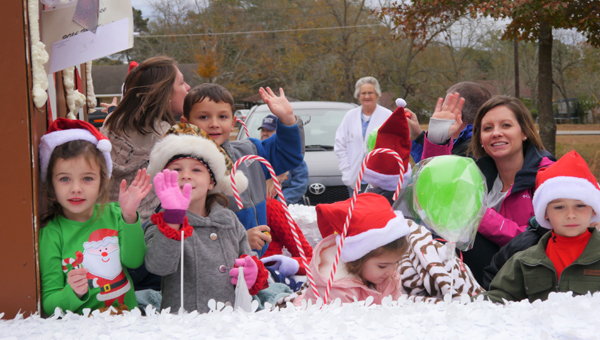 The folks aboard the Welcome Baptist Church’s float in McKenzie remind you “‘Tis So Sweet to Trust in Jesus.” The float took third place in the contest.

Saturday brought not one, but two parades celebrating all things merry and bright in south Butler County. McKenzie kicked things off at 10 a.m. with a colorful parade featuring a number of floats, decorated vehicles, sleek high-powered motorcycles, an old-fashioned horse-drawn buggy and festive music, courtesy of neighboring community Georgiana and their GHS Panther Band.

Perennial parade participant and number one McKenzie Tiger fan Greg Griffin piloted the float for the McKenzie Quarterback Club, featuring “Kris Kringle Stadium” in “Snowflake City” where the snowmen were taking on Santa’s elves. Also seen and heard in Saturday morning’s parade were Snoopy atop an Alabama-themed bi-plane, singing puppets and the Sonic Cherry Lime Aid character, in the second of his three parade appearances this season in Butler County. Naturally, Santa closed out the McKenzie event from atop the big red fire truck, sharing waves, smiles and candy with the parade goers along the route.

The City of Georgiana’s parade took place at 2 p.m. with not one, not two, but three marching bands representing three different counties, all bringing lots of holiday tunes with them. Along with the GHS Panther Band, attendees got to enjoy the musical talents of the Hillcrest High School Band of Evergreen in Conecuh County and Central High School of Hayneville in Lowndes County. Greenville High School’s JROTC units also marched in this year’s parade.

Several area churches were represented by floats and vehicles in the Georgiana parade, including Ivy Creek Baptist ( its stable featuring the nativity scene), Second Baptist Church (celebrating a “Season of Hope, Light and Love”) and Friendship Baptist (a colorful float celebrating the symbols of Christmas). Mt. Pisgah Baptist members were sighted riding a fire truck.

GHS Homecoming Queen Monica Mixon waved to the crowd from her perch, while big rigs and vintage vehicles alike earned cheers as they passed the parade goers. Those in attendance clearly enjoyed the abundance of candy tossed by the entrants, with some vehicles stopping to hand deliver goodies to older attendees with a sweet tooth along the route.

Finally, Santa himself appeared once again atop a big red fire truck, displaying his customary good cheer as he helped close out the 2016 edition of the Georgiana Christmas Parade.