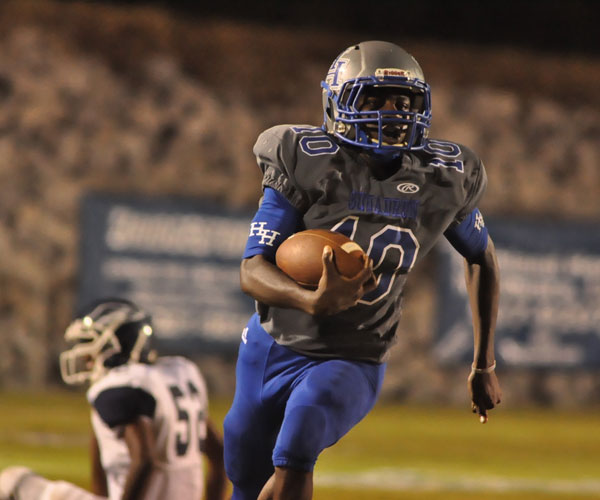 Screaming loudly all throughout Friday night’s game, Highland Home School came out with a homecoming win. HHS is now 2-2 in the region and lack one game from going to the playoffs.

HHS Head Coach Greg Baker is very excited and pleased with the way the football program is headed this year.

“We didn’t have that many snaps offensively, but the big plus for Friday night was special teams. We had two special team touchdowns, which were punt returns,” Baker said.

“Our upfront blocking was much better this week, and hopefully we can continue that. There were younger defensive guys that showed much improvement this week than earlier in the season.”

Early in the game, sophomore quarterback, Daniel Phillips led the charge to a centennial homecoming victory. Shortly after, senior running back, Cammeron Felder put another six points onto the scoreboard.

“I couldn’t be happier that we won our homecoming and another region game. Friday night was very important to us. This week we can get on the field and really improve before we see our next region game. We are very excited and confident about the rest of the season,” said senior wide receiver/linebacker Clay Hobbs.

Sophomore safety Donaven Roberson made an 80-yard interception return for a touchdown Friday night. Along with senior running back Chase Mansmann, who made two rushing touchdowns, one for 84 yards and another for 31 yards.

“Not only did we win a region game, but it was our centennial homecoming. Winning Friday night helped us gain confidence and moved us closer to a playoff berth. Our defense played extremely well and we moved the ball effectively on offensive,” Mansmann said.

This Friday night the Flying Squadron will travel to Beulah. Coach Baker comments on this Friday’s game saying, “Beulah is two classifications above us, but I feel like we’re capable of winning the game. This isn’t a region game but it is still important to us. We have to block and tackle to be able to win, but there isn’t a game on our schedule that we aren’t capable of winning. It’s up to our boys to perform to their ability.”

By: Katie Silva The Lady Dogs have a record of 9-16 this season. They pulled off a tough win against... read more