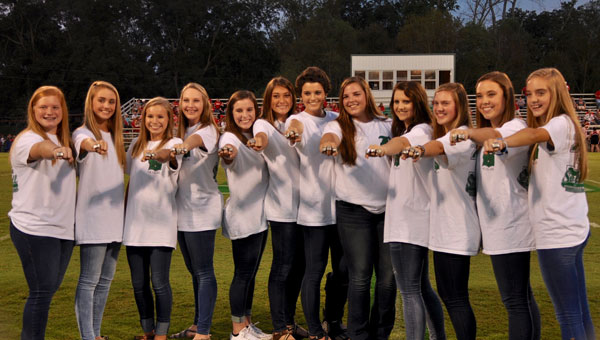 Anybody that has social media or a newspaper can tell that the Brantley High School girls softball team has been on a roll. This past season, they brought back a third state championship for BHS.

Friday night, September 23, before the showdown between the Bulldogs and the Tigers, the Brantley High School softball team took the field to receive their championship rings.

For team member Lauren Hudson, she says, “I could barely breathe before we went on the field. I was so nervous and excited all at the same time.”

Hudson was one of the few receiving her first state ring. Along with her are eighth graders Elleigh Layton and Kendall Navarre.

Layton commented, “We were all so anxious to see what it would look like. It was way more than I could ever imagine.”

However, the real surprise of the night came after their own rings and pendants were handed out. When everybody thought the presentation was over, the team turned to give a pendant to Cindy Jordan, a dedicated photographer for not only the softball team, but Brantley High School as a whole.

In a Facebook post, Jordan said, “I was doing what I love, capturing the special moments of my BHS family, when the attention turned to me.”

She goes on to say, “I was speechless and I am still speechless. Thank you from the bottom of my heart.”

Even though some of the girls were new to the championship life, this was not true for most of the team members. Leanna Johnson, the team’s pitcher and All-State Tournament team member, was one of the many that received her third state ring on that night. 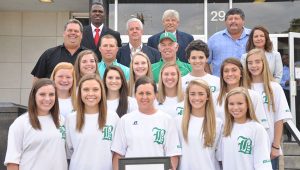 The Brantley Bulldogs softball team was recently honored
by the Crenshaw County Commission for their third consecutive
championship win (Photo by Beth Hyatt).

When asked about how it felt to be on the team for all three wins, she said, “It’s not every day that you get to win three championships in a row, but when you do, that feeling never leaves.”

It was a special night for all of the players, coaches and managers. While they will never forget these priceless and rewarding moments, they still feel they have much more to come. With a streak like theirs, it is easy to assume that they will continue to push for another state title.

Johnson said, “Winning that game was the best feeling ever and I hope we can add another one to this upcoming season.”

In short, expect nothing less from the Bulldog softball team this upcoming season.