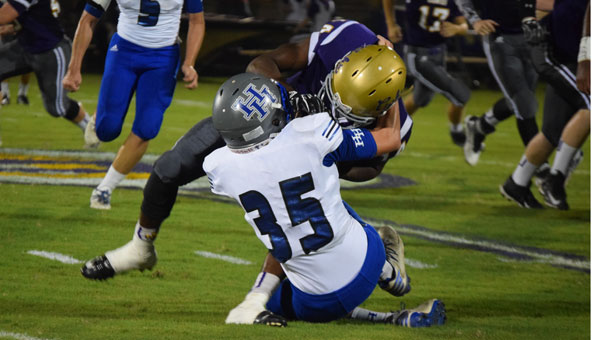 Highland Home came out ready to play Friday night, and they quickly scored the first touchdown of the night early in the first quarter. Before halftime, the Squadron found the end zone once again, creating confidence and excitement throughout the players and fans.

“I think we came out and played good initially and played well but fell off later in the game,” said Assistant Coach Will Pouncey.

Senior offensive and defensive lineman, Jermey May is looking to improve for this week’s game against Autaugaville as he says,

“Not only is it our homecoming, but it is a region game that can help us earn our spot in the playoffs. We have improved on being physical during the game and not giving up. We came out there last Friday, setting the tone for the game but we had struggled with executing our plays. We will come out this Friday night focused and able to drive the ball down the field. We will continue to be very physical on defense, preventing them from having the ball.”

Coach Pouncey continued by saying, “Defensively we improved in our secondary, we forced two interceptions, one resulted in a TD. We shut down their passing game. Offensively, we moved the ball at the beginning and scored at the beginning of the game. The guys fought real hard.”

Just before halftime, sophomore quarterback, Daniel Phillips threw the ball to junior wide receiver Rodricus McLemore, who lateraled the ball back to Phillips, who then threw it to senior wide receiver, Cammeron Felder for a 60-yard touchdown that was nullified by a penalty for having a lineman down the field.

Coach Pouncey commented on the penalty as well.

“A controversial play that would’ve given us the lead occurred, and we are still unsure why the call was made.”

Felder is very excited for this week’s game against Autaugaville.

“If we come out strong Friday night and hit them in the mouth, we can take this win. This game is important,” Felder said.

“We could’ve played better against Geneva County and there’s always room to improve more. We are still working to get better every day, and we are going fix our errors from last week to have them perfected for this Friday’s game.”

As far as the future for the Flying Squadron, Coach Pouncey states, “We are improving every week, the record doesn’t show it but we are going forward as a football program.  We are very confident in this week’s game; we don’t have a tremendous record but we respect our opponents and we are looking forward to getting back on track Friday night.”

The Flying Squadron will prepare for their homecoming and area game this Friday night against Autaugaville High School.