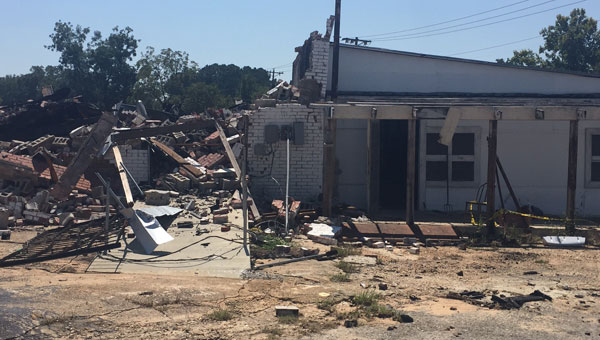 After a building fire rendered the former This-N-That building on Hwy 331 unsalvagable, the establishment returned to its home on Main Street in Downtown Luverne (Photos by Beth Hyatt).

Last month, tragedy struck the establishment formerly known as the This-N-That Thrift Store on Hwy 331 when the building caught fire on August 1.

The first call to the Luverne Fire Department went out Monday morning at 4:15 a.m., according to LFD Assistant Chief William Neal.

“Upon arriving, we knew this building was two stories on the inside and had had multiple roofs on it,” Neal said.

“This building is probably, at least, 80 years old, and we knew it had furniture in it, which burns quickly.”

The fire fighters went with the technique of surround and drown in order to ensure that the flames would not spread to neighboring structures.

“We had a lot of support. We are fortunate that where it was at, by the water tank, we had very good water flow from the fire hydrants,” Neal said.

“We kept it confined to the building of origin.”

While no one was injured in the fire and no surrounding buildings took a hit, the business within the building has suffered greatly. With a total loss of inventory, owners Andy and Diane Tomlin have worked tirelessly to ensure that their business gets back on its feet.

Currently located on Main Street in Downtown Luverne, This-N-That offers customers an array of furniture, mattresses, cookware and much more.

“We just started over and moved back downtown. It took few weeks to get things back up and running,” Andy said. 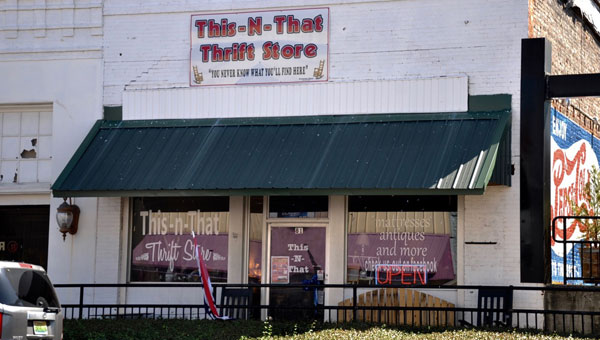 With its return to Main Street, This-N-That has replenished its stock of items and is open for business (Photos by Beth Hyatt).

“I think a lot of people don’t know we’re back in town yet. We had a lot more traffic out there. We were out there about a month or two.”

Andy noted that along with being a thrift store, This-N-That also doubles as a used furniture store. The pieces are collected from estate sales, liquidations, yard sales and more.

“We have bedroom, dining room and anything you can put it your house, we have it. We carry new mattresses, frames and rails. We also have appliances like refrigerators, stoves, dryers and washers,” he said.

Currently the hours of operation are set for 10 a.m. to 5 p.m. Tuesday through Saturday and will be closed on Mondays.

While the transition has not been a particularly easy one for the Tomlins, they are glad to be back on their feet and ready to start back into the business they love.

There is still no update on the cause of the structure fire.