Bulldogs and Tigers to face off 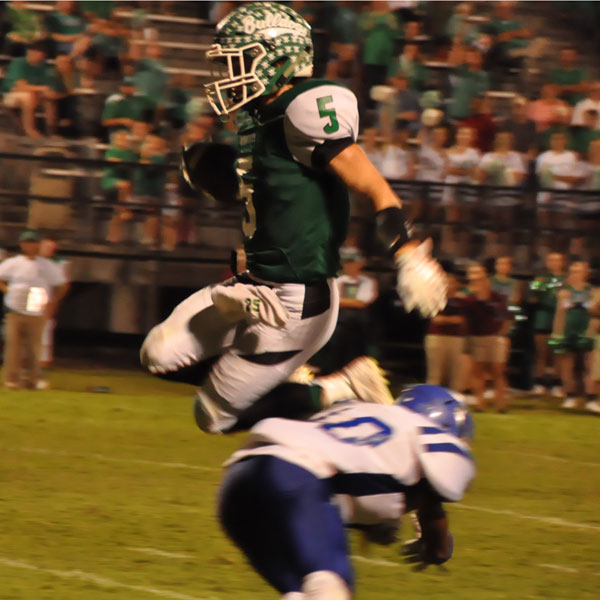 Pictured is BHS junior Mack Wise dodging the Georgiana Panthers as he charges toward the goal (Photo by Beth Hyatt).

In one of the most anticipated games of the season, the Brantley Bulldogs took to the field to battle it out with the Georgiana Panthers. In a sad turn of events for the Bulldogs, the Panthers came away victorious at 44-20.

“Georgiana played well and they had a good team. We didn’t play well. There’s no escaping that,” said BHS Head Coach Ashley Kilcrease.

“You can’t give a good football team two touchdowns right before the half like we did. We didn’t coach well, we didn’t play well, we didn’t do anything well. It was just a bad night for us.”

The Bulldogs saw no action on the scoreboard in the first quarter.

In the second quarter, a touchdown from senior wide receiver Tommy Spivey with a 13-yard pass from senior quarterback Jacob Free put the Bulldogs on the board. No extra point was earned.

Kilcrease believes that unlike games in the past, the Bulldogs did a good job of starting the game off right. Unfortunately, timing mistakes caused the Bulldogs to fall behind as they went into the half.

Heading into the third, a touchdown by junior running back Mack Wise with a 4-yard run and two-point conversion brought the Bulldogs up to 14-28.

Another touchdown by Spivey with a 14-yard pass from Free and a failed two-point conversion made the score 36-20 in favor of the Panthers.

The Bulldogs saw no action on the scoreboard in the final quarter of the game.

“Mental preparedness is something we have struggled with and must work on to be able to perform like we should. We have learned not being ready will cost us,” said senior linebacker Garrett Barksdale.

This week the Bulldogs will face off against their county rivals the Luverne High School Tigers. The Bulldogs hold a 2-2 record going into the rivalry game, while the Tigers are 3-1.

“We still have four region games, so there’s a lot of time left. Obviously, that puts them in the driver’s seat, because they control their own destiny,” Kilcrease said.

“We still have good opportunities in front of us, we just have to do a better job than what we did this past week. It’s always a challenge playing Luverne, but we’re a lot more worried about us. We have to get better, play better and do the little things better.”

The game will take place on Friday at 7 p.m. at BHS.