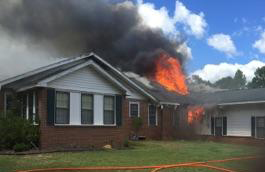 On Aug. 31 a house fire broke out at 6565 E. Curtis Street in Glenwood. Members of the Luverne, Brantley, Glenwood and Goshen Fire Departments rushed to the scene and were able to extinguish the fire in a matter of hours, according to Luverne Fire Department Assistant Chief William Neal.

The first call went out to the Luverne Fire Department at 12:41 p.m., and firemen were on scene until close to 5 p.m. that night.

“The fire started in the rear room, and nobody was home. We had to do like we did at the This-N-That building and surround and drown it,” Neal said.

“It started out small, but that house had been remodeled several times.”

Neal states that due to the age of the house and the amount of times it had been remodeled through the years, it posed a much greater threat of burning quickly after catching fire.

Firemen were recalled from searching the house once it was discovered that no one was home and the roof had begun to collapse.

Firemen were able to extinguish the fire in a matter of hours, and no one was harmed. (Photo by Beth Hyatt)

“The house was built by Mr. Jim Lester, who was a lumber man, in about the late ‘20s,” said Glenwood Mayor Billy Knight.

“It was the first brick home in Glenwood for many, many years. Mr. Lester was one of the first people in Glenwood. The house was like a relic for the town. Luckily, nobody was at home when it burned, so there was no loss there as far as life is concerned.”

The cause of the fire is currently unknown.