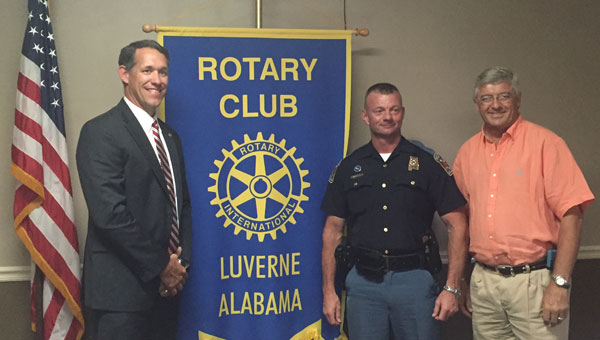 Recently, Alabama State Trooper Kevin Cook served as the guest speaker for the Luverne Rotary Club. While there, Cook explained to the group his thoughts on staying safe while driving. Pictured are, from left to right, William Tate, Kevin Cook and Danny Rolling, Rotary Club president. (Photo by Beth Hyatt)

Recently, the Luverne Rotary Club welcomed Alabama State Trooper Kevin Cook to join them as their guest speaker. Cook is a Dothan native and 1988 Rehobeth High School graduate, and served in the United States Marine Corp for six years.

Cook has been employed as an Alabama State Trooper for 19 years, spent 12 years as a Traffic Homicide Investigator and Crash Reconstructionist and for the last seven years has served as the department’s Public Information Officer.

State Troopers are entities represented by the Alabama Law Enforcement Agency (ALEA), which was created by Act 2013-67 and represents the consolidation and realignment of 12 state law enforcement agencies/functions into one entity.

The main focus of Cook’s talk revolved around traffic safety.

“To say that our law enforcement is underappreciated today, especially in the times we’re at, is an understatement,” said Crenshaw County Probate Judge William Tate, who invited Cook to speak to the club.

“As I understand, we are approximately 300 troopers statewide from being at the level we need to be. They are definitely undermanned and underappreciated.”

According to Cook, there are approximately 259 troopers currently on the road who are responsible for 67 counties statewide. Two counties, Bullock and Pickens, do not even have troopers assigned to them.

“If we continue to lose people like we are to attrition and retirement without properly hiring folks, there will not be any state troopers in six years,” Cook said.

“Because in six years the three biggest classes that came out of the ‘90s will be gone. Those are my class and two other classes, which is approximately a little over 170 of those guys.” 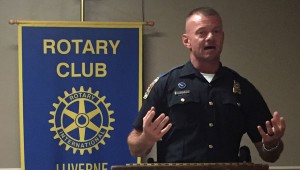 Cook believes these fatalities have risen because the lack of troopers keeps them from being able to more thoroughly patrol roads and respond.

Cook stated that having more of a trooper presence on the road would lessen the number of incidents merely because of the way drivers respond to law enforcement while driving.

“It’s a proven fact that when people see law enforcement, they have a tendency to change their driving behavior,” Cook said.

Cook stated that the top five reasons for car accidents are distracted driving (which can be a side effect of texting or eating while driving), speeding, driving under the influence, following too closely to someone and aggressive driving, otherwise known as road rage.

According to Cook, incidents for road rage have increased by 15 percent this year, and many of the incidents involve drivers leaving their vehicles to engage in altercations with other drivers.

According to Cook, 40 percent of all fatal crashes in Alabama are alcohol-related, and the nationwide total is at 32 percent.