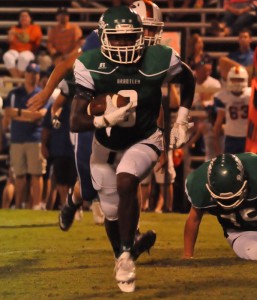 As the Brantley High School Bulldogs took the field to battle it out against the Kinston Bulldogs, the team was ready to defend their territory and bring home a Homecoming victory. They did not disappoint as BHS came in with a 62-6 victory.

“I feel we played very well. The starters didn’t get to play long but when we did, we played well,” said senior quarterback Jacob Free.

“Nobody really likes a blowout game, but a win is a win and we will take it.”

The first quarter put BHS on the board and kept them at the top as they gained a total of 36 points.

“We got a lot of guys in the game that hadn’t gotten to play much yet. They work hard, and they are very important to the team,” said BHS Head Coach Ashley Kilcrease.

“For them to get in and get some action, to me that was the highlight of the night.”

Junior wide receiver D’Andre Sinclair scored the first touchdown of the night with a 76-yard pass from Free, and senior defensive end and kicker Tucker Owens earned an extra point.

A touchdown in the second quarter by junior wide receiver Edge Branum with an 8-yard pass from sophomore Jake Kilcrease and an extra kick by Owens brought the score up to 43-0 at the half.

“I think we played a lot better on defense; that was a strong plus. Offensively, we came out and were very explosive, which is where we want to be,” Kilcrease said.

In the fourth and final quarter of the game, Kinston was able to score their first and only touchdown, but not before sophomore running back Quin Jackson brought in a final touchdown for BHS with a 9-yard run and a failed two-point conversion, ending the game at 62-6.

“You struggle, I guess you could say, with getting better when you don’t play good competition. But I thought we handled it the way you’re supposed to by not being sloppy,” Kilcrease said.

This week, BHS will hit the road to do battle with the Pleasant Home Eagles.

With the holiday weekend, the Bulldogs were able to take Monday off to rest, but will hit the field extremely hard this week to make up for that day off.

“Pleasant Home is better on offense. They have a strong offensive team, so we’ll have to spend a lot of time on defense preparing for them,” Kilcrease said.

After traveling to Mobile to face off against the St. Luke’s Wildcats, the Luverne High School Tigers came home with... read more