Ashford tells of success with Shoney’s 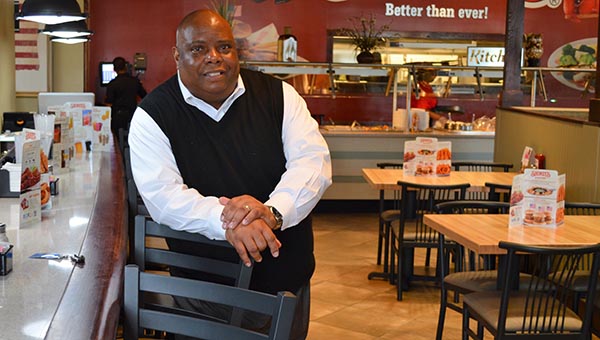 After working his way to the top, Ashford now is the proud owner of three Shoney’s in Greenville, Dothan and soon to be in Evergreen.

When Eric Ashford was growing up in Pickens County, there were just two real choices in life for a young man like him.

“You either worked in pulpwood or you went into the military, that was basically it,” Ashford, owner of the Greenville Shoney’s, explained.

Known more for cutting up in class than applying himself to his studies, the idea of higher education and training for a profession “wasn’t even something that entered my mind.”

“I wasn’t a bad kid. My grandparents who raised me did teach me integrity and respect–and good southern cooking. But back then, yes, I was pretty much the one in school least likely to succeed,” Ashford said.

An encounter at a restaurant while visiting relatives in Tallahassee, Fla., became a life-changer.

“I don’t think I’d ever been inside a ‘real’ restaurant, just the small town places back in Carollton. This man came up to me and asked me if I want a job—and that’s how it began. After hauling pulpwood, working in a restaurant seemed pretty easy,” Ashford explained.

At age 18, he started off washing dishes at the Florida restaurant and over time, worked his way up through the ranks. Ashford set himself the goal of being the best at whatever tasks were assigned to him along the way.

“I was going to be the best dishwasher, the best floor sweeper, the best bus boy, the best food bar manager—there was something inside me that made me want to make things better for my family and in the world.”

Today Ashford is the owner of three Shoney’s, including the Greenville and Dothan locations since 2005, along with an Evergreen location built from the ground up and opened in March 2016. He notes with a quiet pride he is the first African-American owner to build a brand-new Shoney’s.

“Building the Evergreen restaurant was a big challenge and a learning experience. There were good days and bad days. I just held on to my faith in God and that kept me strong,” Ashford recalled.

“Honestly, in the beginning I never thought I would make it this far. But with hard work, respect for everyone and integrity, I’ve come to this place in life.”

Just as someone once took a chance on him, Ashford, too, wants to give young people an opportunity to work and to succeed in their lives.

“I take an interest in the employees and I try to encourage them to do their best at their jobs and in the classroom. I talk with them about grades and even see their report cards,” Ashford explained. “I never had the grades to get into college, but I want my employees and my children to know they have these opportunities if they have determination and work for them.”

Ashford and his wife Patrice take great pride in the accomplishments of their three daughters, Ericka, Elisha and Ashley, with two having already earned their bachelor’s degrees and the third slated to graduate in two years.

“I think it’s my biggest accomplishment, being able to give our girls the education I didn’t have the chance to get,” Ashford said.

Ashford has a particular affection for his Camellia City restaurant, calling it “my baby.”

“I love Greenville. This community here has been so welcoming and supportive from the beginning. And we like being involved with the city in various ways,” he said.

Ashford, who often speaks to youth groups and civic clubs, has a message for young people.

“I always ask them, ‘What drives you?’ and ‘What are you working for?’ If you love what you do, if you have a passion for it—that will lead you to your destiny.”

Excuses, Ashford says, have to be kicked to the curb.

“I could have made a lot of excuses. My dad died when I was seven, I was raised by my grandparents, life didn’t give me many opportunities,” he says.

“But I pushed all that out of the way and went on. If everything hadn’t worked out, at least I could say I tried. And if everything was lost tomorrow, I could say I did get this far. You’ve always got to look on the positive side and keep aiming high.”