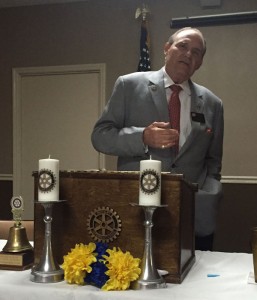 Last week, the Luverne Rotary Club had a visit from their District Governor, Barry Cavan.

“It was an honor having our District Governor visit with our club. Luverne Rotary is made up of positive thinking business leaders and citizens who are eager to make a difference in our community,” said Rotary President Danny Rolling.

During the meeting, Cavan shared with the group different stories of Rotary through the years, some of the greatest memories and accomplishments of the group to date and also what the true mission of Rotary is.

“I believe that Rotarians have the faith to believe that they can create solutions for these needs they find. As Rotarians, I think we have the courage to make it happen.”

The theme for Rotary this year is “Rotary Serving Humanity.” This theme came from Rotary founder Paul Harris when he said he believed that serving humanity was the most worthwhile thing a person could do with their lives.

Cavan also told the group about the first 3H grant given to a Rotarian group in the Philippines in 1979; this group then used the grant to provide polio immunization inoculations to all school aged children in the area.

Seven years later, PolioPlus came to life and has since become one of Rotary’s biggest and most influential service projects.

According to Cavan, $1.5 billon has been spent on the elimination of polio, and 2.5 billion children have been immunized.

“Rotary has led the way to eliminate a terrible, disabling disease,” Cavan said.

According to the Centers for Disease Control and Prevention, the number of worldwide polio cases has fallen from an estimated 350,000 in 1988 to 407 in 2013—a decline of more than 99% in reported cases.

Four regions of the world are certified polio free—the Americas, Europe, South East Asia and the Western Pacific. Only three polio-endemic countries (countries that have never interrupted the transmission of wild poliovirus) remain—Afghanistan, Nigeria and Pakistan, which means that 80% of the world’s people now live in polio-free areas.

“You are the most important part of this district, because you are Rotarians, you’re active and you’re doing something,” Cavan said.

Cavan mentioned that at one point in time a person interested in being a member of Rotary needed to meet six criteria; these criteria have since been changed to one sentence: That a member be a person of good character, who has a good reputation in their business or community and is willing to serve the community.

In closing, Cavan reminded members of the tried and true way Rotarians can be sure that all they think, say and do matches up to the true meaning of Rotary: “The Four-Way Test.”

“The Four-Way Test” of Rotarians is simply spelled out in the following way: First…Is it the truth? Second…Is it fair to all concerned? Third…Will it build goodwill and better friendships? Fourth…Will it be beneficial to all concerned?

“People come to Rotary because they share the same values that we share. They believe in that Four-Way Test that we believe in,” Cavan said.

“Gandhi said, ‘The best way to find yourself is to lose yourself in service to others.’ Paul Harris believed in his heart that serving humanity was the most worthwhile thing a person could do with their life. Being a Rotarian gives you that opportunity to serve.”