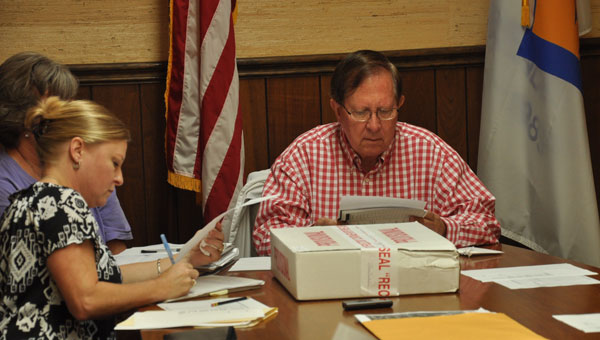 A week after Luverne and other local towns held elections, provisional ballots were gathered and tallied into the overall totals for each candidate by Mayor Pat Walker and members of Luverne City Hall. (Photos by Beth Hyatt)

A provisional ballot is used to record a vote when there are questions about a voter’s eligibility.

A provisional ballot can be cast in cases where the voter refuses to show a photo ID in regions that require one or if the voter’s name does not appear on the electoral roll for the given precinct.

“This happens when a voter comes in and are either not on the correct district list or they’re not on any list, but they actually have proof of where they live in the City of Luverne,” said Anita West, custodian of elections.

“They can vote on provisional ballot, and that way the paperwork goes to the Board of Registers after the election’s over. Then they verify that we voted them in the right district. When that happens, their votes are counted a week later.”

The names of the provisional voters on these ballots were not made public in the meeting to ensure the privacy of those involved.

For the office of Mayor of Luverne and City Councilmember District Four, a runoff election will be held on Oct. 4.

A runoff election will be held for the office of City Council District Four between Elliott Jones, who received 109 votes, and Robyn Snellgrove, who received 94 votes.

The complete list of official results for each Luverne mayoral and city council candidate are as follows, according to Luverne City Hall:

The newly elected city council and mayor will take office the first Monday in November, and they will all serve four-year terms.