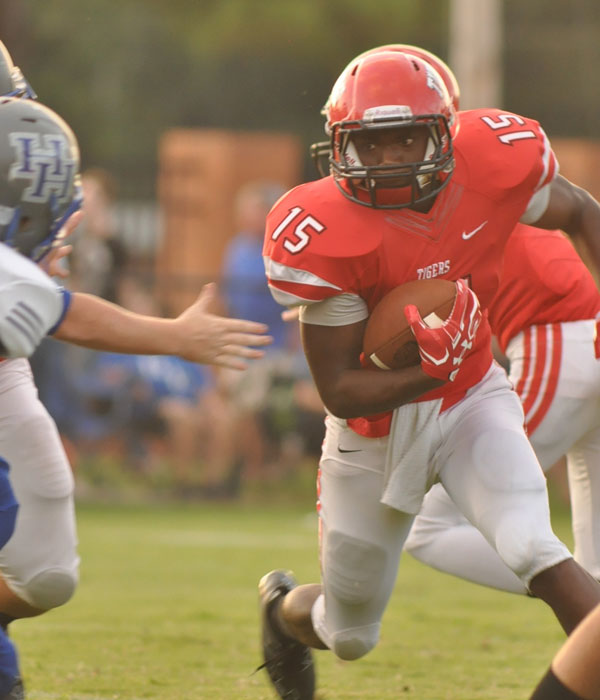 LHS junior running back Marcus McGhee goes for a first and goal for the Tigers at the end of the first quarter. (Photos by Beth Hyatt)

Last Friday, the Luverne High School Tigers faced off with one of their county rivals, the Highland Home School Flying Squadron.

The Tigers left the field that night with a 20-0 victory, and now look toward their next game ready for another round.

“We feel good to get the win; it’s a good win, and nobody got injured significantly,” said LHS Head Coach Scott Rials.

“But we realized we have much work to do to get where we need to be.”

For the first two quarters of the game, both teams stayed off the board, but things quickly heated up after the half.

The first touchdown for the Tigers came from senior wide receiver Antavious Brown with a little over six minutes left in the third quarter; an extra point was earned by sophomore linebacker Chase White, bringing the score up to 7-0.

The last touchdown for the Tigers was brought home by junior running back Marcus McGhee; no extra point was earned, bringing the score up to 20-0.

McGhee had a total of 24 carries with 190 rushing yards for a game total. White completed two out of three good kicks for the Tigers.

When asked about the game, McGhee replied by quoting the popular verse of scripture Philippians 4:13, “I can do all things through Christ who strengthens me.”

“In the fourth, we were up 20 with about six minutes to go and we felt pretty good. Anything can happen in a football game; teams can score three touchdowns in six minutes,” Rials said.

“Our defense had a pretty good beat on them at that time, and we felt like we could pretty much hold them barring something drastic happening. Up until then, we were having trouble scoring, holding on to the football and that sort of thing.”

This week the Tigers will travel to Mobile to play the St. Luke’s Wildcats. Rials knows that one of the biggest challenges the team will face this week is the travel.