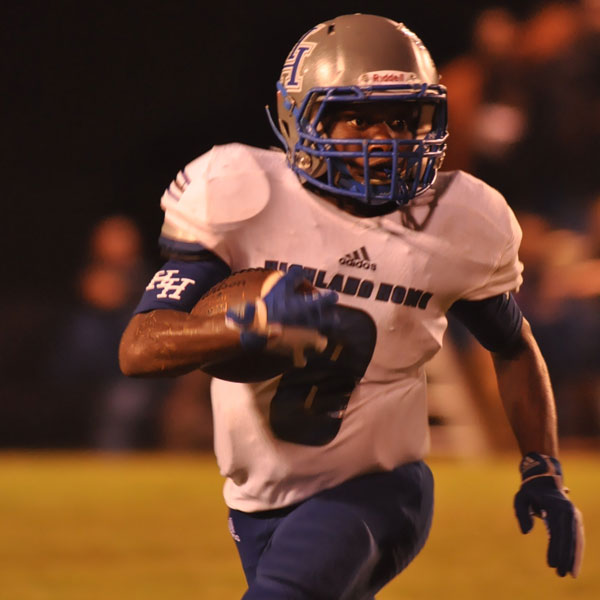 HHS senior wide receiver/defensive back Dreke Bell makes his way down the field at the end of the fourth quarter. (Photo by Beth Hyatt)

With their first official season game on the books, the Highland Home Flying Squadron fell to the Luverne High School Tigers last Friday night, but they are not letting that dampen their spirits.

“That’s the biggest difference between this team and last year’s, our kids have learned to fight and to play no matter what the circumstances are,” said HHS Head Coach Gregg Baker.

“Our kids fought tooth and nail, and I am so proud of them for that. We can build off that.”

The team’s defense played well until the fourth quarter rolled around, according to Baker. He believes that the loss of two of his starting players due to injury played a part in this.

“That kind of put us on a downward spiral, but Luverne came ready to play and they did what they had to do to win,” Baker said.

“Our guys didn’t quit, and if we keep getting that kind of effort we’re going to be okay.”

“Chase is just a competitor. He wants to do well, and he is a runner. You may see him a little more this week at running back because of that,” Baker said.

“We’re just trying to do what’s best for our guys, but Chase and Dreke have busted their tails this summer. They worked hard at camp, and they are two of our biggest leaders. That’s obvious on Friday night.”

“Last week, we played extremely well. Our defense is great and we did a great job at stopping big plays,” Bell said.

“The defensive struggled a little bit last week, but we are working on fixing that this week. We have a long season ahead of us, but the seniors are doing everything we can to make sure we are the backbone of our team.”

This week the Squadron will play their first region game in Selma against Ellwood Christian Academy.

“We’re really just going back and looking at basic stuff. It’s one of those deals where we have to improve on Highland,” Baker said.

“I’m not so much worried about Ellwood Christian and what they’re doing as I am about Highland and what we’re doing.”