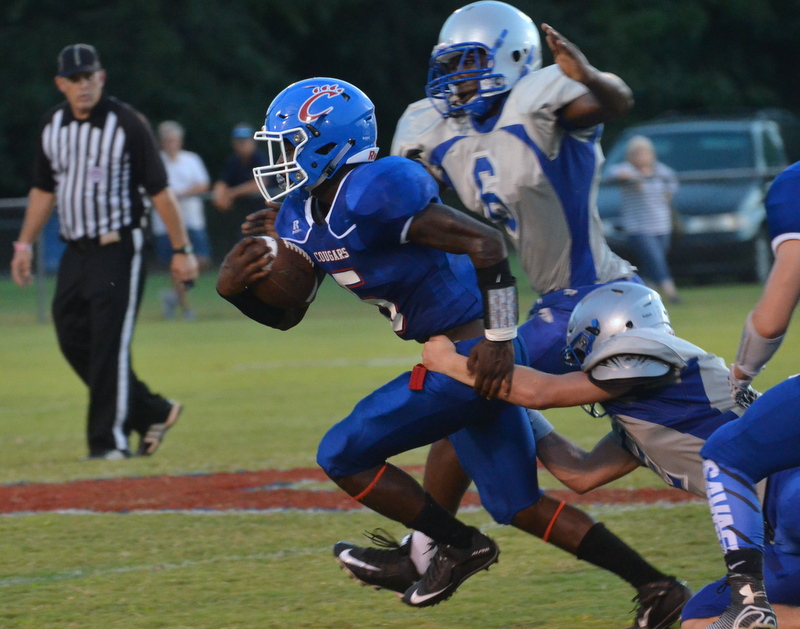 Junior running back Quashaun Laprade struggles to get out of the clutches of the Chiefs.

On Friday night, the 0-1 Crenshaw Cougars walked the same path from their field house to their home field as they have before every home game for the past 10 years, but the path looked a little bit different this time.

The grass was littered with painted cougar paws, and right in the middle was a single word: “CHANGE.”

“Change” was much more than a word to the Cougars this week. They were seeking redemption.

The 1A Cougars got their change, and routed the 3A Lakeside Chiefs in a 75-34 win last Friday night.

“So we pushed even harder. We went full pads all week, and we went later and worked better. We knew we had to change things, and coach Sims knew exactly how to get it.”

“We didn’t play the best ball game that we could have, but we played well. I’m proud of the work we’ve put in, but there are a few things we have to work a little harder on,” said CCA Head Coach Mike Sims.

“I just don’t want these guys to think that that is the standard, because a 75 points is a big win. That’s unrealistic. We won because we gave a winning effort, and while we didn’t give the best effort, we did give our best effort to date.”

The Cougars’ offense boomed once again.

“Our offense performed very well, and Quashaun Laprade had another huge week. He would’ve peaked about 500 yards had we not gotten about 130 yards’ worth of penalties called back, so that’s something we have to improve on,” said CCA Assistant Coach Scotty Pennington.

“We executed extremely well on offense tonight. Our line came up huge,” boasted senior linebacker Cade Calhoun, who had 10 tackles against the chiefs.

“I’ve never seen our line play better. Our defense had a few miscues, but nothing that one or two practices can’t fix. We have to use this upcoming week to get better in all aspects of the game, even after a big win. It’s easy to think that we’re headed uphill from here and that we’ll have our next game won, but we are going to have to keep coming out and earning our wins every week.”

Junior Tyler Henderson led in tackles for the second week in a row, with 12 on the night. Senior Billy Wright made waves for the CCA special teams unit with multiple 50-yard kick returns and the recovery of an onside kick.

Crenshaw will travel to 2A Macon-East Montgomery Academy this Friday.