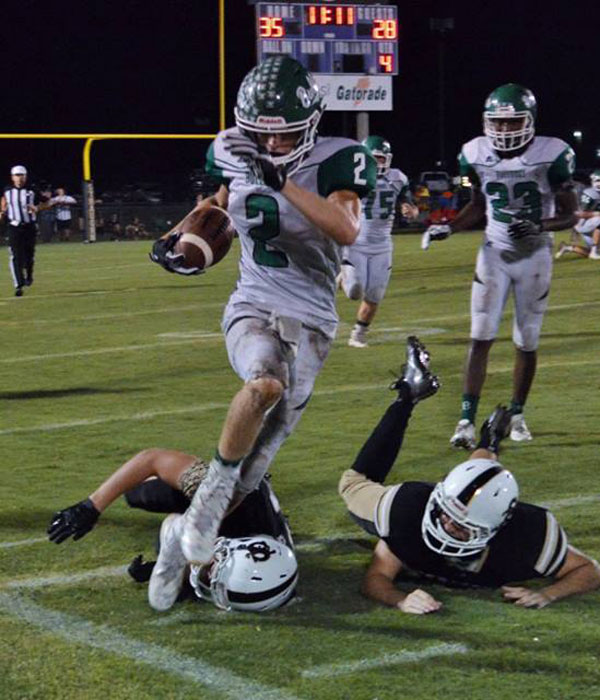 BHS senior wide receiver Tommy Spivey charges over the Straughn Tigers as he makes his way down the field.

In a nail-biting back and forth between the Brantley High School Bulldogs and the Straughn High School Tigers, the Tigers walked away victorious at 49-48, but not without a fight from the Bulldogs.

“We didn’t play well early; we kind of got off to a slow start, especially on offense. We started off slow and picked it up in the second quarter,” said BHS Head Coach Ashley Kilcrease.

“We need to learn to start better. That was kind of what happened last year, so that’s a little bit of a concern. We played really well on offense; we just couldn’t stop the run on defense. We had a chance at the end to win the game, and that’s what you can hope for.”

In the first quarter, junior running back Mack Wise put the Bulldogs on the board with a touchdown with a 20 yard run and an extra point scored by senior defensive end Tucker Owens. This tied the Bulldogs with the Tigers at 7-7.

Going into the second quarter, senior quarterback Jacob Free completed a touchdown with a one yard run and an extra point earned by Owens with the kick; this brought the score to 21-14 in favor of the Tigers at the half.

“We all played well and fought our hearts out. There are just some simple things we are continuing to work on and get better at, but overall I think it was a great game by both sides,” Free said.

Heading into the second half of the game, the tides began to turn for the Bulldogs.

A touchdown by senior wide receiver Tommy Spivey with a 67 yard pass by Free and an extra point kicked by Owens brought the score up to 27-21 in favor of the Tigers.

Another touchdown by sophomore wide receiver Parker Driggers with a 58 yard pass from Free and an extra point kicked by Owens brought the score up to 35-28, still in favor of the Tigers.

“I think the offensive line as a whole is playing really well as far as up front. On defense, I thought that Adrian Person played really well, and Parker Driggers played well on defense also,” Kilcrease said.

Going into the fourth, the Bulldogs felt confident that they could pull ahead if they had the ball last.

A touchdown by Wise with a five yard run and a failed two-point conversion brought the score to 35-34, Tigers leading.

In a great turn of events, a touchdown was scored by Driggers with a 36 yard pass from Free and a successful two-point conversion, which boosted the Bulldogs’ score 42-35.

“I felt like if we got the ball last, we’d have a shot to win, and that’s basically what happened,” Kilcrease said.

At the end of the game, a touchdown from Spivey with a 40 yard pass from Free and a failed two-point conversion knocked the Bulldogs back down as the Tigers took home the ball game at 49-48.

According to Kilcrease, that last failed two-point conversion in the fourth was where the Bulldogs could have potentially taken home the victory.

If the Bulldogs had completed the extra point kick, they could have gone into overtime, according to Kilcrease. But after assessing the players, it was decided that they could not take on that challenge.

“We could have kicked the extra point, tied it up and gone into overtime, but we honestly just didn’t feel like we had a good shot in overtime. So, we thought that was our best bet,” Kilcrease said.

This week the Bulldogs will face off against the Kinston Bulldogs at home in their homecoming and first region game.

“We are preparing this week just like it’s any other week. We can’t take anybody lightly. Although homecoming week is a little stressful, we are working hard,” Free said.

As a whole, Kilcrease says this week the Bulldogs will go back to the basics with teaching fundamentals and trying to get together a better plan for beginning strong in the games.

“It was a very physical ballgame, so we’re pretty sore. We have some guys that are banged up, so we need to practice physical, but it’s hard to do when you’re scared you’re going to get someone else hurt as well,” Kilcrease said.

“Kinston’s going to be a little more spread offense. Obviously I think we will have an advantage being able to throw the football. Overall for this week, we’re trying to avoid all distractions.”