Squadron readies to take on Tigers 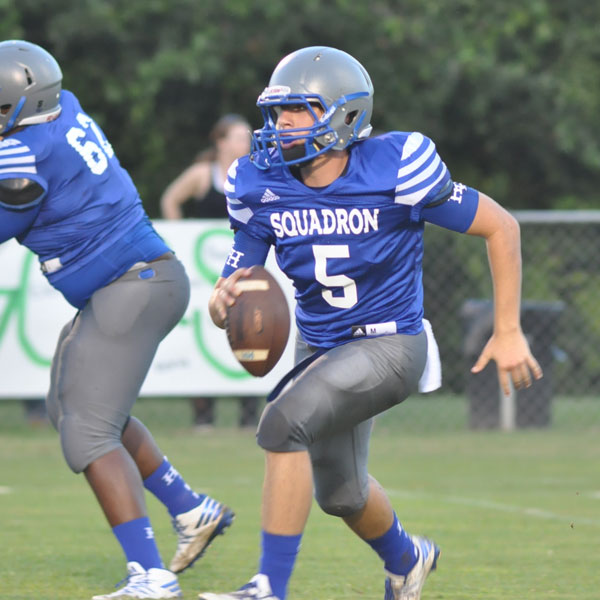 Senior HHS quarterback Chase Mansmann makes his way down the field for a touchdown before the end of the second quarter. (Photo by Beth Hyatt)

With 25 seconds left in the second quarter, still no points were on the board for the Squadron. Just as the buzzer sounded, senior quarterback Chase Mansmann scored a touchdown for the Highland Home School Flying Squadron, and gave the team a boost to head into the second half of the game.

“I was very, very happy with our guys. We did not do very well last year,” said HHS Head Coach Gregg Baker.

“Last year when we got down by about two or three touchdowns, we were giving up, we hung out heads and quit. They didn’t do that this year. They fought, came back at the close of the half and punched one in. To me, the score was not indicative of how our kids played. I was proud of our kids.”

Last Friday a jamboree game was held at HHS between the Squadron and the Brantley High School Bulldogs.

While the game did not count against the Squadron’s record, the team did suffer a defeat of 34-14.

Baker said that each mistake made by the Squadron is easily correctable and will be worked on throughout the week to ensure a good game on Friday.

“We had a couple bum coverages, but that was just young kids being in new spots and not fully understanding what’s going on, some guys went the wrong ways on plays or maybe blocked the wrong person on certain fronts,” Baker said.

“Typically your biggest improvements are between week one and week two, so that’s what we’re hoping to see. There was no lack of effort or glaring problems that we saw, so I feel really good about that.”

While no points made it to the board in the first quarter, the Squadron came back fighting just as the buzzer sounded going into the half.

A touchdown by Mansmann brought the score up to 19-7 with an extra point completed by sophomore punter/kicker Aubrey Reeves.

The Squadron didn’t score again until the fourth quarter when senior running/defensive back Cammeron Felder scored a touchdown with an extra point from Reeves, bringing the score up to 34-14.

“Brantley has a good team this year. I feel we did a great job in the first and second quarters,” Mansmann said.

“If we take it one week at a time, we will keep getting better. We have Luverne this week and we’ve been working hard to get ready for them.”

Baker noted that Felder played a great game this round both offensively and defensively. Baker says Felder has taken a leadership role on the team as a senior and worked tremendously during last week’s game.

This week, the Squadron will go head to head with the Luverne High School Tigers at Luverne, and Baker says the Tigers’ offense is very similar to that of the Squadron’s.

“Offensively, they are athletic; we knew that coming in. They’re going to be just as athletic as Brantley was, they’re a 2A school so they’ll probably have a few more players than we do,” Baker said.

“I feel good about my guys and my team. They’re going to fight; I know that now. If we go in, do what we’re capable of doing and cut out the mistakes I think we can at least be in the ballgame.”