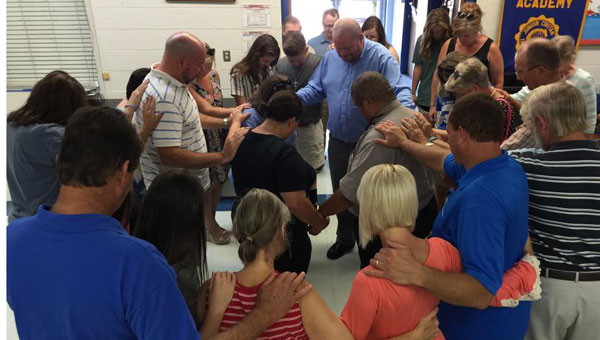 Crowds gathered at Crenshaw Christian Academy and other Crenshaw schools for prayer walks before the school year began.

At the beginning of each school year, students, faculty, parents and citizens alike have gathered together at their local schools to pray for the upcoming school year.

While prayer is not always a welcomed thing in the education system today, the schools of Crenshaw County continue this tradition and did so earlier this month.

Members of the Alabama Crenshaw Baptist Association WMU group gathered supporters to attend prayer walks at all Crenshaw County Schools, and asked those in attendance to travel around the grounds of the schools and offer up specific prayers for the students and faculty who would soon be entering the doors.

“People would go to each individual classroom, the lunchroom, buses parked nearby or the football field, basically anywhere they were led to go. They would do a brief prayer for everyone involved with the schools here in the county.”

The numbers ranged anywhere from 50-150 in attendance across the county. Some schools also invited local pastors to attend the events to offer words of encouragement along with brief messages.

“We believe that prayer is so, so important, and we want to pray for the people who are watching our children in school, for the children attending school and that it will be safe. If there’s ever a time that we needed to do that, it’s absolutely now.”

Local elections were held Tuesday night in Luverne and surrounding areas. For the City of Luverne there are 1,936 registered... read more