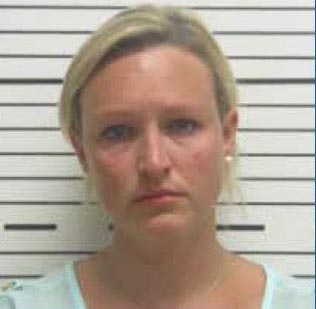 An employee of Greenville Motor Company has been arrested and charged with first-degree theft of property, according to the Greenville Police Department.

Hope Gibson Langston, a 31-year-old white female from Greenville, has been arrested in connection to “possible fraudulent activity and internal theft” at Greenville Motor Company, according to Greenville Police Department captain Justin Lovvorn.

“In early May 2016, the Greenville Police Department was contacted by management at the Greenville Motor Company in reference to possible fraudulent activity and internal theft,” Lovvorn said.

““Investigations opened a case to investigate the suspicious activity within the company and over the past three months has audited much of the financial records of the Greenville Motor Company.  We have also taken statements from employees and reviewed the company’s general history of activity.”

The investigation has since uncovered numerous unauthorized charges made to the company’s account by a single employee during a nine-month period.

“The management at Greenville Motor Company has reviewed our findings and verified that the charges were not acceptable for company expenditures,” Lovvorn added.

Though Langston was released on bail, she was arrested a second time Thursday morning and charged with trespassing after returning to Greenville Motor Company premises.

According to Lovvorn, she was advised more than once prior to her release that she was not to be on Greenville Motor Company property or have contact with management or employees.

“This morning, she drove over to Greenville Motor Company and parked out back, and it appeared that she intended to enter a side door to go into a building,” Lovvorn said. “And there just happened to be an employee that was at the back of the business at the time who notified law enforcement that she was outside.

“When we questioned her after observing her on the property, she said that she just wanted to come pick up some items and thought it wouldn’t be a problem.  But due to our conversation and charge that was already on her, and her being advised to stay away from the property, we charged her with trespassing at that point.”

Langston was released on bond Thursday based on a series of stipulations outlined by Butler County District Attorney Charlotte Tesmer.

Tesmer’s first stipulation was that she not go anywhere, except to see her doctor or lawyer.

“Langston was instructed to report to her physician based on concerns of the defense that she hadn’t taken her medications for attention-deficit/hyperactivity disorder (ADHD) and bipolar disorder like she should,” Tesmer said. “So one of the conditions is that she immediately get a doctor’s appointment with her regular physician, and follow up with whatever other doctor she might need.

“Also, any weapons in the house had to be turned over to the Greenville Police Department for safe keeping.

“And the judge reiterated that she is not to have any contact with any of the Greenville Motor Company employees, and she is not to go onto that property.  And I think she had as clear of an understanding as she could, because the judge said she would put her back in jail if she broke any of these conditions.”

Langston has been placed on house arrest until further orders from the court are given.  No trial date has been set.