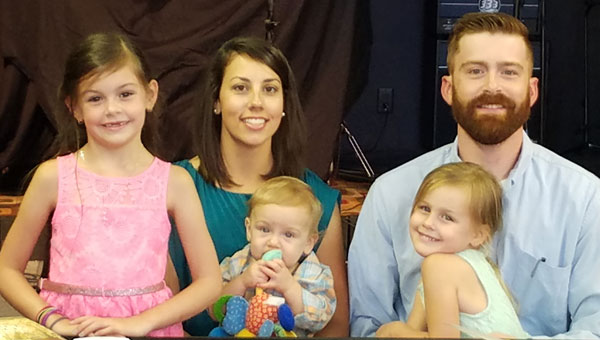 Pictured are, from left to right, Madelyn, Jessica, Josiah, Ava and Woody Money at a recent book signing.

After almost seven years of compiling his journal entries and his experience in ministry, 2004 Crenshaw Christian Academy graduate Woody Money has completed his book “The Secret Place: Intimacy with God.”

While a student at CCA, one of his teachers predicted he would one day be a minister.

“I had some things that I couldn’t explain that were spiritual that actually did take place while I was at CCA, and she encouraged me to be a pastor one day.”

Money says his journey as a writer began about seven years back when he was involved in five different ministries at once.

He recalls the miracles he witnessed while a part of these ministries, and many of these are talked about in the novel.

While working for the Lord is what Christians are called to do, Money said that ministry began to take over his life. He may have been plugged into spiritual matters, but his relationship with God was not where it needed to be.

“Ministry took over my life, and I never really understood the principle of being led by the spirit; I just decided that it was a good thing. And there were people out there who needed Jesus and I decided no matter the cost, I am going to go full throttle into ministry,” he said.

Eventually, the demand of multiple ministries began to hit home as Money’s relationship with his family experienced turmoil.

One night, Money says that the Lord spoke to him in a dream and told him, “The church is in the kitchen, while I am in the bedroom. They’ve traded intimacy with me for their own works.”

“That applied to my own life. I was head over heels in love with ministry, but I barely knew God. It began to ruin my life,” Money said.

“The Lord gave me that dream and began drawing me into spending more time with Him without an agenda and getting to know Him.”

Years went by and Money began writing these instances and occurrences down on all sorts of paper scraps.

Soon the old patterns of overdosing on ministry and a lack of intimacy with God began to creep back into his life.

After collecting them all and not knowing what to do with them, Money sat down and began to sift through the papers to find out why he had regressed.

“I said, I have to go headlong into this and find out what in the world set me free to start with and how can I communicate that to my kids,” Money said.

“My kids need to hear this story, because I don’t want them to go through this bipolar thing with God that I’ve been going through for years.”

It was then that he began to put his writings together in the form of a book for his children. Money said that he never intended to write a book, but as he continued to piece together his journals, the manuscript fell into place.

The first part of the book centers on Money’s journey to finding intimacy with God and is written in a language to his kids; the final part reaches out to all audiences and takes readers on a practical path that believers can follow to help find more intimacy with God.

“I wanted to find intimacy with God, but it found me. It’s not a formula, because God’s not a formula, but my hope is that maybe there’s language we can use or more practical steps to help them on this journey,” he said.

“What I hope to do is make the language easier to understand for new believers and people who already believe. I hope to introduce the reader to a deeper intimacy than they may know now.”

The last part of the book lays out six prayer models that are aspects of what the Bible calls the secret place in Psalm 91.

Through these prayer models, Money hopes to give the reader specific goals and guidelines to follow rather than the cliché answers that sometimes make their way into religious teachings.

“Intimacy with God is the most natural thing for a person to experience. It’s what they were created for,” he said.

“When someone finds intimacy with God, it destroys addictions and chains simply because of who God is. You are created to be free from guilt and shame, depression and addictions. Being with Him is the fulfillment of all things.”

A book signing was held recently, and another is slated for today at Village Coffee in Troy from 5-7 p.m.