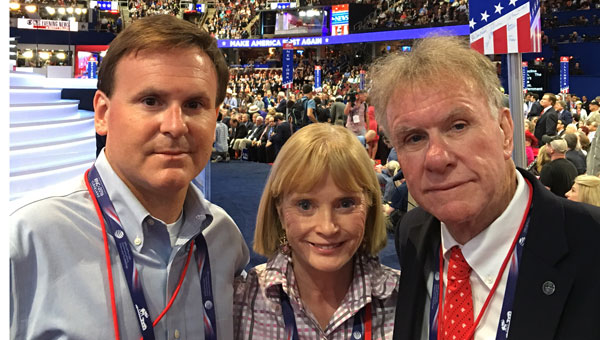 Pictured are, from left to right, Bill Rayborn, Suze Butts and Terry Butts at the 2016 Republican National Convention.

Recently, three members of the Crenshaw County community had the opportunity to travel to Cleveland, Ohio, to attend the Republican National Convention (RNC).

Justice Terry Butts and his wife Suze are no strangers to politics and the RNC.

In 2012, Butts was elected as a State at Large Delegate to the National Republican Convention, while his wife was elected as an Alternate Delegate. Currently, Butts works with the State Senate and still practices law.

This year, the couple decided to bring along one more dedicated political mind to share in the experience.

Bill Rayborn got his first taste of the political world when he served on Butts’ campaign for attorney general. Since then, his fascination with politics has continued to grow.

“There’s something that happened to Bill at this convention that is historic for Crenshaw County,” Butts said.

According to Butts, a person cannot be nominated for president unless a certain number of states sign the nomination list. Eight states were picked to sign, and each state required 20 delegate signatures to complete the petition; Rayborn had the chance to add his signature to the document.

“For this election, I kind of feel like I was a part of something that I’m never going to see again,” Rayborn said.

“Signing that petition was probably the biggest honor of my life.”

This year marks the fourth convention that Terry and Suze Butts have attended, but they both agree that this one takes the cake.

“What hit me the most about this convention was that we had a guy from Brantley who signed a historic document, and we’re sitting at what I think is really a water shed year,” Justice Butts said.

“We were part of a historic moment. And who would have ever thought that literally two country boys would ever participate in something like this?” 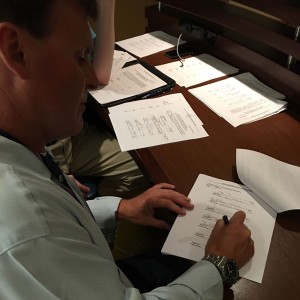 Pictured is Bill Rayborn adding his signature to the electoral petition during the 2016 Republican National Convention. Rayborn was one of 20 Alabama delegates to sign this petition; Alabama was one of eight states to participate in the signing as well.

The week did not only consist of business, however, and the group did get to experience local attractions such as the Rock and Roll Hall of Fame.

The group agreed that whether or not a person is interested in politics, an event like this truly brings out a patriotic side.

“Judge Butts is one of my closest friends. So first of all, I got the comradery of being there with he and Suze. We got to hang out on the floor and watch this historic event. That was a huge privilege,” Rayborn said.