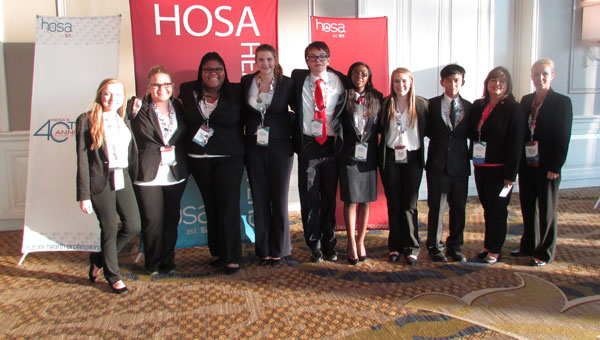 The Crenshaw County Schools’ Health Occupations Students of America (HOSA) members attended this summer’s leadership conference. Students as well as Crenshaw County faculty members were given awards for their accomplishments.

Over 9,200 HOSA members, advisors and guests participated in HOSA’s first-ever International Leadership Conference in Nashville, Tennessee, June 22-25.  HOSA-Future Health Professionals from all over the country, Canada, American Samoa and Puerto Rico came together to compete, learn and share their HOSA experiences.

Those members recognized and awarded during the conference were as follows: Barbara James Service Award winners for having over 100 hours of community service hours with the organization: Kaitlin Galloway, Bailey Wilson, Layken Sanders and Megan Hudson. Bailey Wilson was awarded in the recognition category of HOSA Chapter Reflections for her completion of the club’s scrapbook.

Gracie Roberts was a finalist in the top 10 in the nation in the competitive event category of Medical Photography. The club overall was recognized for its contributions to the HOSA National Service Project that raised funds for the Leukemia  and Lymphoma Society.

Advisor, Becky Cornelius, was awarded the Region II Outstanding HOSA Advisor sponsored through Goodheart-Willcox Outstanding Service Awards that recognizes three local HOSA chapter advisors in the nation, one from each HOSA region who have made outstanding contributions of local, regional, state and national significance to the promotion, development and progress of HOSA–Future Health Professionals.