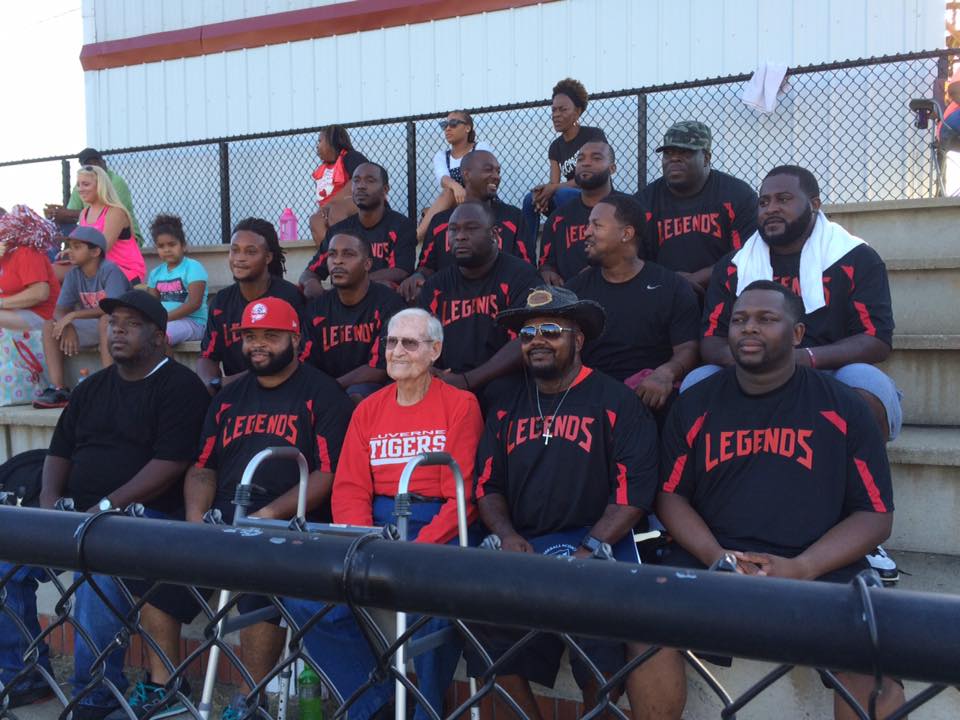 Former LHS coach Glenn Daniel sits with his group of “Legends” at the recent alumni football game held at LHS. At the end of the evening, Daniel was presented a trophy for his service to LHS.

Recently, Luverne High School played host to some hometown “Legends” in an alumni football game featuring one of the school’s favorite coaches, Glenn Daniel, and many former LHS athletes.

“The football game was more than just a game. It was a way to rekindle old friendships, and have the players see that community service should be a focus in school and out of school. I hope more of our graduates return home to help.”

The football game did more than just serve as a way to get back in touch with old classmates, it also coincided with the annual Back to School Bash put on my Payton McGhee, director of the Kendrick-McGhee Charitable (KMC) Foundation, and his aunt Wendy McGhee.

“I love football and I know that the county is really big on their football. I’m always trying to think about different ways I can get the community involved in giving and donating,” McGhee said.

“We do the Back to School Bash every year, so this year we wanted to do an event outside of it. So we started working toward the alumni game. It’s something that’s never been done before here, and it’s something we’re certainly going to do annually.”

McGhee said there were over 200 people in attendance, and the KMC Foundation also met their goal to cover their scholarship fund.

Among those in attendance was LHS former coach Glen Daniel, “The Legend.”

“They pleasantly surprised me at the end. I didn’t know what the circumstances were, other than they were going to play about four games,” Daniel said.

“My last year of coaching was ’99. Our first state championship was in ’91, and there were probably five or six boys that played on that team there that night. We won again in ’97, and there were, I expect, a few more from ’97 there.”

At the end of the games, Daniel was presented with a trophy to thank him for his service at LHS, and had the chance to catch back up with many of his former athletes.

McGhee is a 2008 graduate of LHS and was ecstatic to be able to return to the field with his fellow players for another game.

“I believe we all have to work together in order to accomplish any type of big goal, and I feel like a happy community is something that everyone should strive for,” McGhee said.

“In a time like this where, unfortunately, people have strayed away, some by color and economic classes and things like that. I think a lot of those issues could be resolved if we are all amongst each other in a neutral type of environment.”

James McCreary, part of the special education department at Brantley High School, was born and raised in Luverne and had the opportunity to attend LHS and play under Daniel.

Pictured are the winners of the LHS alumni football game.

“I was the last class that coach Glen Daniel coached. I just took the initiative to get in touch with coach; he is definitely ‘The Legend,’” McCreary said.

“I feel that [events like these] get everyone back and gives us a chance to fellowship with former teammates, classmates, as well as former teachers.  So many people were saying how they enjoyed the game and seeing us older guys come out and compete with the younger guys.  We won the championship this year and hopefully we will repeat next year, but in this event everyone won because the kids will benefit from it.”

With the success of the alumni football game behind them, the KMC Foundation now begins to plan for an alumni basketball game as well as an adult prom in the coming months.