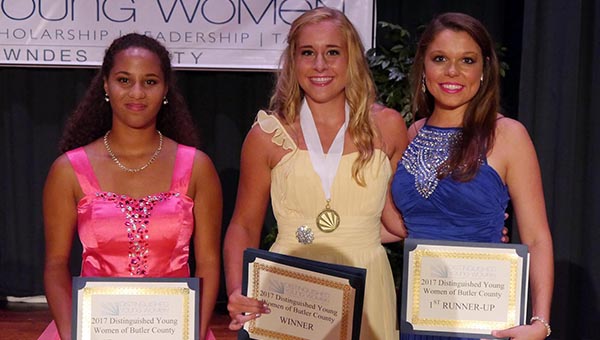 Strength, intelligence, talent, self-confidence, moral fiber, an ability to inspire and lead and a combination of grace and graciousness under pressure: these are just some of the qualities that the Distinguished Young Woman Program seeks in its participants.

Last Saturday, six high school seniors from Butler and Lowndes Counties took to the Ritz Theater’s historic stage to vie for their county’s 2017 DYW titles in the second year of a combined program for the two counties.

Half of the panel of five evaluators’ scores for the young women took place before they ever stepped from the wings of that stage, with 50 percent of their scores based on scholastic achievement and individual interviews with the panel conducted on Saturday afternoon.

Gaston received the category awards for Fitness, Scholastics and Talent. A longtime dance student of Sonya Rice as well as a student athlete and varsity cheerleader, Gaston performed a contemporary dance to “Stereotype” by Black Violin. She earned a total of $2,650 in cash tuition scholarships along with a $500 stipend for the state competition in January.

First runner up honors for Butler County went to Jennifer Grace Arnold of FDA. Arnold, who won the Interview, Essay and Self-Expression categories and the Spirit Award, danced to the inspirational “Something to Believe in” by Linda Eder.  The SGA president, dance team member and student athlete earned $2,150 in scholarship monies.

Calloway, a student athlete and SGA representative, received the Scholastic and Talent Awards in addition to her Lowndes County title, earning a total of $1,300 in cash tuition scholarship monies. A church pianist at Midway Baptist, Calloway performed Rachmaninoff’s challenging “Russian Concerto” for the talent competition.

Aja Lee of the Calhoun School was awarded the “Be Your Best Self” Essay Award and the title of second runner up for the Lowndes program. Lee, a student athlete and JROTC member, performed a praise dance to “Put a Praise on It.” She took home a total of $300 in cash scholarship monies.

The Little Sisters, a group of high school students who support and encourage the participants each year while getting a taste of what DYW is all about, performed a lively dance routine choreographed by Miller. And the youngsters who participated in the High Heels Boot Camp brought down the house with an amusing routine choreographed by Christy Bozeman, introducing themselves in true DYW style afterwards.

Thought-provoking moments were provided by Angelanette Brown and Sellers Swann, who read their winning “Be Your Best Self” essays from the 2016 competition, describing how major life changes each girl had encountered had challenged them to grow and learn.

With 2016 Lowndes County DYW Mary Claire Carlton wrapped up  in preparing for summer session finals, Miller, who performed the National Anthem at the beginning of the program, stepped in for presentation duties for both counties. The incoming University of Alabama freshman shared about her DYW experiences at the state level.

“I know I made great friends that will be forever friends and my host family truly was like family to me . . . it was stressful but so much fun. And now I am getting ready to move to Tuscaloosa and super-excited about it all,” Miller said.