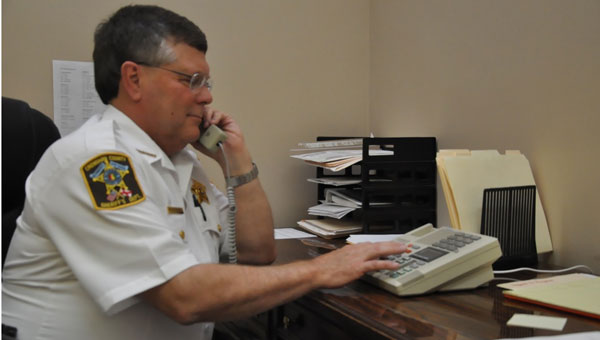 Crenshaw County Sheriff Mickey Powell assures citizens that the IRS will not contact you via telephone. (Photo by Beth Hyatt)

“There’s been a lot of calls here in the county and everywhere, really. Other sheriffs have been getting them, too,” Powell said.

“The callers say they will file a lawsuit if people don’t pay money. This is just a ‘flim-flam’, the IRS will not call you, and they’re not going to file a lawsuit and all of this. They will send you information in the mail.”

Powell said that the calls reported all focus on the same topic: lawsuits for failure to pay. According to Powell, this is not a contacting method used by the IRS and should be ignored as well as reported.

“A lot of people get scared by this, because they are threatening lawsuits. If they call, just hang up on them,” Powell said.

“We’ve had some people say they were told the IRS tried to contact them several times, ‘you have not responded and a warrant has been issued against you. Your local law enforcement will be contacting you soon.’”

While Powell has not personally seen any cases in the county where individuals have sent money to these agencies, he has noticed that many of the targeted individuals are elderly.

“There’s no telling how many folks actually send this money in. So many people take it so seriously,” Powell said.

While Powell and his office would like to see these calls end, he knows that the likelihood of that happening is zero to none. Powell stated that many of these calls come from foreign agencies and can therefore not easily be tracked and monitored. The best method for handling these calls, according to Powell, is to confuse the callers by turning the questioning back on them.

“If you start questioning these folks, don’t give them any pertinent information, like your driver’s license number or social,” Powell said.

“Ask them, well if I owe you money, what is my social security number? Put them on the spot, and they won’t know. That will tell you that it’s bogus.”