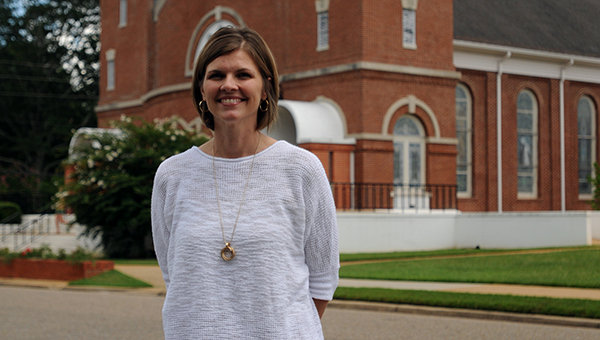 That was certainly the case for Angie Long, the new pastor at First United Methodist Church in Greenville.

Long, a Montgomery native, never dreamed she’d be called into full-time ministry. The mother of two, who had earned an accounting degree from Auburn University at Montgomery, had worked as an accountant at a Montgomery firm before becoming the budget director for Alfa Insurance.

Life was rocking along.

She and her husband were what she described as “Easter churchgoers.”

“I was relatively unchurched,” Long said. “We’d go on Easter, and there were bouts of regular attendance, but we were not very connected to church.”

Then came the unexpected turn.

Long began regularly attending Aldersgate United Methodist Church, and as time went on became more involved. As she began to study scripture and teach Bible studies she began to feel a new call on her life.

A gentle “nudge” from God.

“Soon it was evident that God had plans for me — plans that I could not ignore,” she said.

Those plans were to become an ordained pastor in the United Methodist Church.

For Long that meant three years of commuting to Atlanta two days a week to take classes at Candler School of Theology at Emory University.

It meant rising at 3 a.m. to make an 8 a.m. class and then driving back at the end of the day.

The drive gave Long time to meet with God and come to grips with the call on her life.

“For three years I drove to Atlanta and back twice per week, spending countless hours listening, praying and talking with God about this work, this life, and this call that was now mine,” she said. “From there it became clear I was to become an ordained elder in the United Methodist Church.”

Then she got the call.

FUMC was in need of a pastor and Long was being called to fill that role.

She said she and her family have been welcomed with open arms.

“The community has been unbelievably amazing,” Long said. “They even started reaching out to us before we got here. It speaks volumes about them because I know they were disappointed to lose David. He is a wonderful pastor. I know they had grown to love him, Elizabeth and Joseph. I’ve known David through our conference and he’s one of our brightest and most well respected clergy. They were going through a process of dealing with the unexpected change, and grieving a bit, but for them to be able to reach out to us even among that speaks volumes about their ability to love people and what the Holy Spirit has done here in their lives. We’ve been so thankful for such a warm reception.”

Long has been on the job since the beginning of July and preached her first sermon on July 10.