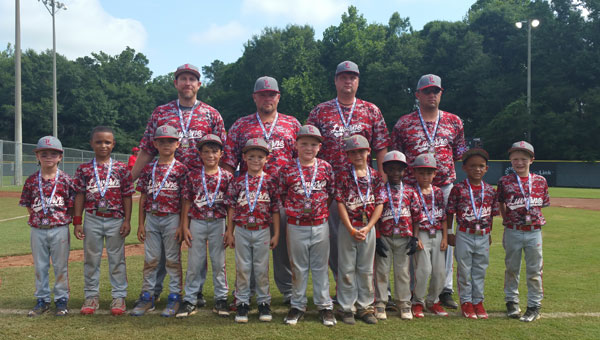 The Luverne All-Star teams completed their season of summer play over the weekend.

The Luverne All-Star six and under team finished third in the state tournament.

“All players played hard and brought 100 percent throughout the progression of the tournament,” head coach Chris Matthews said.

The team won its first game on Thursday night, and progressed to beat Headland as well before losing on Saturday to Eufaula. In their final game, the All-Stars suffered another loss against Eufaula 12-14.

“No disappointment though. Our boys fought like champions all four days of the tournament. They are champions.”

The eight and under boys’ team traveled to Troy, Alabama to compete in state competition but came up short. The team took two losses to Muscle Shoals and Fairhope.

“I am very proud of these 12 players,” head coach Jeremy Kilpatrick said.

“They played their hearts out.”

Six and under All-Star girls’ softball competed in Montgomery, Alabama. The girls saw two losses against Tallassee and Underwood in the state tournament.

“We had a fun and exciting season,” assistant coach Misty Morgan said.

“I hope the girls learned a lot and return next year harder and stronger.”

The Luverne All-Star teams extend thanks to the parents of the players and their sponsors: Country Spool, Cousin’s Insurance, Dynamic Sports Team, Blue Springs Water and Towne and Country Flooring.