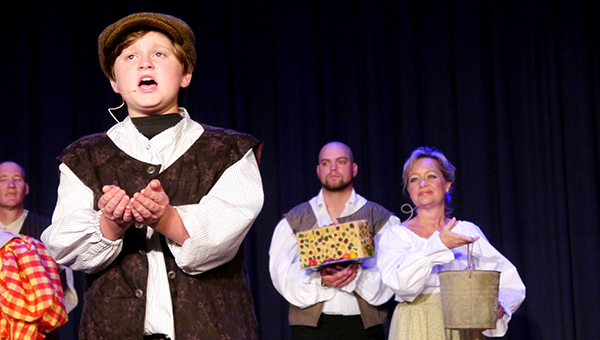 Stirling Hamilton fell in love with performing after taking part in the Greenville Area Arts Council’s production of Putting on the Ritz. (Advocate Staff/Angie Long)

A youngster from Greenville is making his debut in “Beauty and the Beast” at the Alabama Shakespeare Festival this weekend.

For 12-year-old Stirling Hamilton, his newfound love for performing all started on the stage of Greenville’s Ritz Theatre this past spring.

“That’s it. That’s where it started, being part of Putting on the Ritz,” said Stirling. “That’s how I found out how much I really liked performing on stage.”

The fledgling actor, who will be a seventh grader at Fort Dale Academy in the fall, performed as the lead character in the “Oliver!” segment of the local production, an annual musical fundraiser for the Greenville Area Arts Council (GAAC).

Stirling’s mom Jennie, also new to the Ritz Players, got to share the stage with her son during the performance of “Who Will Buy?” Stirling also performed a wistful solo of “Where is Love” and joined his fellow Ritz Kids for the lively “Consider Yourself” from the popular Broadway musical.

“We both had so much fun with Putting on the Ritz and it was just a thrill for me to be on stage with my son . . . I was so proud of him,” said Jennie.

Prior to Putting on the Ritz, Stirling says he had performed on a couple of occasions at St. Thomas Episcopal Church, “but never in something so big.”

The months of rehearsing in the Ritz Reception Room and on its stage definitely lit a spark within him. 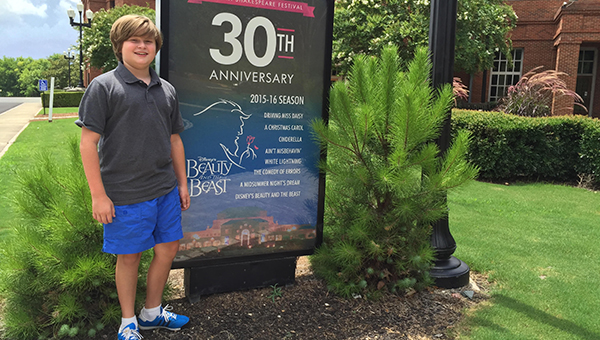 Greenville’s Stirling Hamilton will play the role of Chip, the housekeeper’s son in the ASF production of “Beauty and the Beast.” (Courtesy photo)

And when the opportunity arose for Stirling to try out for the role of Chip, the housekeeper’s son in the ASF production of “Beauty and the Beast,” he was excited for the chance to perform on another stage.

The “Beauty and the Beast” gig almost didn’t happen.

“It just so happened that the one night we had off the week we were doing Putting on the Ritz was Wednesday — and the ASF auditions were that Wednesday,” said Jennie. “It’s as if it was just meant to be.”

At his audition, Stirling was given a song to sing and asked to tell a joke.

“I think they wanted to see my personality when I did that,” he explained.

He and two other boys were chosen to alternate the role of Chip, with each boy slated to perform in a total of at least 10 shows (more if the production was extended).

“These other guys — they’ve been in a lot of shows compared to me, so I felt really good to have been chosen,” Stirling said.

Being part of the “Beauty and the Beast,” cast brought new and exciting experiences for the young actor before the curtain even rose for his first performance.

“Geoffrey Sherman, ASF’s director, took the entire cast and crew out to Carrabba’s for supper before their first practice,” said Jennie. “Many of the actors who were in ‘The Little Mermaid’ last year at ASF returned for this show. It was so cool to have a meet and greet with all the cast.”

Stirling says he’s been having a great time in rehearsals and making new friends. He is eagerly looking forward to performing a new song, “Human Again,” that is being featured in the live-action film version of “Beauty and the Beast” now in production.

His mom, who got to take a tour of ASF’s costume department, was amazed at the detailed preparation for Stirling’s costume.

“For that first fitting they took hundreds of measurements . . . he’s had additional fittings and because he’s grown this summer, they are having to make a few alterations,” she said. “I am sure the costumes are truly going to be amazing.”

Not that she’s actually seen the costume or any of the rehearsals, for that matter.

“Parents and family are strictly forbidden until that first performance, so it’s truly a surprise for us,” Jennie said.

“I can hardly wait to see him on stage. It’s been hard being kept in the dark.”

Stirling will have many hometown faces in the audience for several of his “Beauty and the Beast” performances.

“People in town have been so sweet, wanting to know when he’d be performing the role,” his mom said.

“There is a group from our church going one night, Nancy Idland and some of the Ritz Players will be there another night — we just appreciate everyone’s support and encouragement. It’s just wonderful to know they will be there in the audience, too.”

And it all began on the well-traversed boards of Greenville’s historic Ritz.

“We are so proud of Stirling and grateful to Nancy and everyone involved in Putting on the Ritz for letting him discover his love of theater,” Jennie said. “He really had no idea what it would mean to him until he got that opportunity.”

Stirling’s summer commitment to this out-of-town role has meant less time enjoying the customary beach trips with his family or indulging in his favorite hobby, new and vintage Lionel model trains. Even so, he says he would be willing to do it all again.

“I have been inspired and I want to inspire other people,” Stirling explained. “I want people to know if there is something you are good at and you really want to do it, then go out there and do your best.”

“Beauty and the Beast” will be performed at ASF through July 31 with the possibility of adding dates in August.